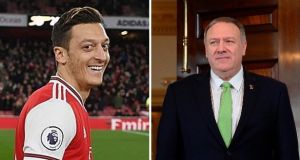 US secretary of State Mike Pompeo said in support of Mesut Özil’s broadside against Beijing, ‘ truth will prevail’.

US secretary of state Mike Pompeo on Tuesday came out in support of Arsenal player Mesut Özil for his criticism of China’s treatment of ethnic Uighur Muslims.

The Arsenal midfielder, a German Muslim of Turkish origin, last week in social media posts called Uighurs “warriors who resist persecution” and criticised China’s crackdown and the silence of Muslim states in response.

“China’s Communist Party propaganda outlets can censor Mesut Özil and Arsenal’s game all season long, but the truth will prevail,” tweeted Mr Pompeo. “The CCP can’t hide its gross #humanrights violations perpetrated against Uighurs and other religious faiths from the world.”

China’s Communist Party propaganda outlets can censor @MesutOzil1088 and @Arsenal’s games all season long, but the truth will prevail. The CCP can’t hide its gross #HumanRights violations perpetrated against Uighurs and other religious faiths from the world.

The United Nations and human rights groups estimate that between one million and two million people, mostly ethnic Uighur Muslims, have been detained in harsh conditions in Xinjiang province as part of what Beijing calls an anti-terrorism campaign.

China has denied repeatedly any mistreatment of Uighurs.

Washington has been ratcheting up its criticism of Beijing over Uighurs simultaneously as it has continued its trade deal negotiations. US president Donald Trump in November signed into law congressional legislation backing protesters in Hong Kong despite angry objections from China.

Earlier this month, the US House of Representatives passed legislation requiring a stronger response to Beijing’s treatment of its Uighur Muslim minority.

What started as demonstrations against a now-withdrawn Bill allowing extradition from Hong Kong to mainland China has changed into calls for greater democratic freedoms and nearly six months of sometimes violent protests in Hong Kong. Beijing has condemned the unrest and blamed foreign interference.

The controversy is the latest between the sports industry and China. In October, an executive with the National Basketball Association expressed support for the pro-democracy demonstrators in Hong Kong, angering Beijing and suddenly putting on shaky ground the league’s estimated $4 billion market in China. – Reuters