Authorities rule out use of pagoda for festival, forcing change of venue 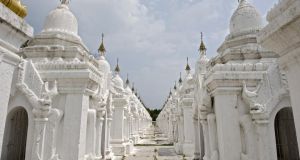 The Kuthodaw Pagoda in Mandalay is home to the biggest book in the world. Built during the reign of King Mindon, it houses 729 stupas, or stone-inscription caves, containing entire canon of Theravada Buddhism. Photograph: Nicolas Asfouri/AFP/Getty Images

The Kuthodaw Pagoda in Mandalay is home to the biggest book in the world. A Unesco World Heritage Site, it contains the entire canon of Buddhist scripture – 729 marble slabs – in sacred white mounds that reflect a blinding glare in the midday sun.

Built by King Mingdon in 1853 the Kuthodaw dominates the lower slope of Mandalay Hill, in the city which was the last royal capital of pre-colonial Burma. Where better than the site of the world’s biggest book to host a historic literary gathering?

The Irrawaddy Literary Festival – the first after three decades of military rule – was held last year in Yangon (Rangoon), without political interference, and Mandalay was scheduled to repeat its success this year.

With pro-democracy leader Aung San Suu Kyi as its patron, and international authors such as Jung Chang and Louis de Bernières also attending, along with 90 Burmese literary figures, the city was poised for an exciting few days.

But, in a sign of unpredictable political times, the Burmese authorities changed their minds about the festival at the last minute. A letter from the ministry of culture informed festival organiser Jane Heyn, who comes from Co Antrim, the pagoda could no longer be used as the main venue. This is a country where the struggle between hardliners and moderates within the government has been escalating in recent months.


Infighting
The Irrawaddy festival seems to have been a victim of this infighting. A moderate minister had given permission, only to have been overruled by somebody with less affection for free speech.

As shocked authors and organisers absorbed the news an exiled Burmese writer whispered to me: “It’s a masterstroke worthy of the old Burmese court. You will never know what you did. It could be a move against Aung San Suu Kyi or it could be that somebody felt upset higher up the chain.”

But, in Jane Heyn’s words, it was a moment “when the tough got going”. With the support of an army of young volunteers, the tents, banners, stalls and electrical equipment were relocated from the pagoda compound several hundred yards to the Mandalay Resort Hotel and placed around the gardens.

Among the relieved authors were exiles who had not visited their homeland in years but whose stories of life under oppression have found an audience on the international stage. Now they had a chance to connect with locals hearing them speak for the first time.

Wendy Law-Yone was born in Mandalay but fled the regime and now lives in London. Her book Golden Parasol is a memoir of her father, Edward Michael Law-Yone, founder of the English-language newspaper The Nation , who spent five years in prison under the late dictator Ne Win.

Pascal Khoo Thwe had a lucky escape from imprisonment when he met a Cambridge academic in a restaurant. With his help, Khoo Thwe came to study in Britain and now lives in Norway. His novel Land of Green Ghosts tells of his life growing up in the ethnic Shan state on the border with China.

The arrival of Aung San Suu Kyi was greeted with hysteria from her throngs of loyal supporters. They had waited for hours, waving the red banners of the National League for Democracy on open-backed trucks.

Hundreds of smartphones were held aloft as her car arrived to get a glimpse of their leader.


Comfort and inspiration
Inside the pavilion there was a reverent hush as she described how books had been a comfort and inspiration during her years of house arrest. Her literary heroes were Elizabeth Bennet, who marries Mr Darcy in Jane Austen’s Pride and Prejudice ; and Jean Valjean of Victor Hugo’s Les Miserables , a “true revolutionary”.

She prompted laughter when she said she favoured fictional characters who had independent minds, rather than the “good housewife” praised in a Burmese folk tale.

For the opposition leader it was a brief respite from the daily world of politics and walking the tightrope of dealing with the old guard of the regime, who remain a powerful force. She is expected to run for president next year, although she is currently barred by the constitution.

Under terms imposed by the military government, anyone married to a foreigner cannot hold the office of president. Aung San Suu Kyi’s late husband, Michael Aris, was British.

There is speculation that she has been outmanoeuvred by a government which has no intention of letting go of power.

However, she may find a way around this. If the constitution is not changed it is widely believed she will nominate an elderly member of her party to stand for the presidency, in the hope that her party will sweep the polls and then amend the constitution once it has taken power, paving the way for her to become president.

The young people who crowded in to see the opposition leader are eager to engage with the outside world and shake away the isolation of years of military rule.

The festival offered a hopeful glimpse of the future for Burma but the politics that nearly derailed it offer a reminder of just how tough the struggle will be.