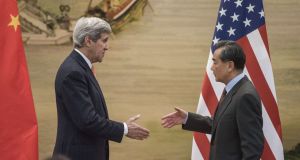 North Korea’s nuclear ambitions and China’s territorial claims in the South China Sea topped the agenda as US secretary of state John Kerry met Chinese leaders during talks in Beijing.

Mr Kerry, in Beijing for two days at the end of an eight-day tour of the region, urged China to do more to stop North Korea from advancing its nuclear weapons programme.

After meeting Chinese foreign minister Wang Yi, Mr Kerry said the US and China agreed there was a need for a significant new UN Security Council resolution targeting North Korea.

He said a goods and services exchange between China and its ally North Korea was one area where steps could be taken by the UN Security Council to beef up sanctions against Pyongyang after its nuclear test on January 6th.

On that day, Pyongyang claimed to have tested a miniaturised hydrogen bomb, although the US said it doubted the claim the North Koreans had that capability.

The 15-member UN Security Council indicated it was prepared to expand sanctions on North Korea following the test.

“We agreed that the UN Security Council needs to take further action and pass a new resolution,” Mr Wang told reporters at a joint briefing with his US counterpart.

“In the meantime, we must point out that the new resolution should not provoke new tensions.”

Isolated by the international community, North Korea is heavily dependent on China for oil, petrol and trade to keep its economy ticking over.

While Beijing has been long irritated by Pyongyang’s nuclear programme, the Chinese have been reluctant to take steps against its ally despite US calls for more sanctions in areas such as shipping, aviation, trade of resources including coal and fuel, and security at border customs.

Mr Kerry reiterated that call, and said he and Mr Wang were looking for a way to impose sanctions that would not unduly harm the people of North Korea.

“All nations, particularly those that seek a global leadership role, share a fundamental responsibility to meet this challenge with a united front,” Mr Kerry said.

Another area the two sides discussed was a way of defusing tensions in the South China Sea, where Beijing’s territorial ambitions have rattled nerves among China’s neighbours.

“I stressed the importance of finding common ground among the claimants and avoiding a destabilising cycle of mistrust or escalation,” Mr Kerry said.

“Foreign minister Wang Yi accepted the idea that it would be worth exploring whether or not there was a way to reduce the tensions and solve some of the challenges through diplomacy.”

The Chinese say their activities in the region, which include building runways on artificial islands in areas such as the Spratly Islands, should not be seen as militarisation.

“China has given a commitment of not engaging in so-called militarisation, and we will honour that commitment,” Mr Wang said.

“We cannot accept the allegation that China’s words are not being matched by action.”

China has claims to nearly all of the resource-rich South China Sea, which has brought it into conflict with neighbours such as Malaysia, Philippines, Taiwan and Vietnam.

In an editorial carried by the official Xinhua news agency, Mr Kerry was warned that “US meddling in the issue” was “an ill-considered move”.

“It is highly advisable that Washington plays a constructive role in promoting peace and stability in the Asia-Pacific region, of which the United States is an important part, instead of sowing discord, because muddying the waters in the South China Sea could blow up in Washington’s face,” the commentary said.