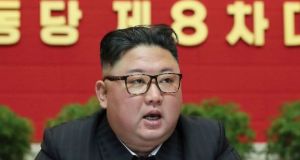 North Korea’s rubber-stamp parliament was scheduled to convene to pass decisions made by a major ruling party meeting where leader Kim Jong Un vowed maximum efforts to expand his nuclear weapons programme in face of what he described as US hostility.

They bowed and pledged to “fulfil their responsibility and duty” to carry out the decisions made during the eight-day Workers’ Party congress that ended Tuesday, the agency said.

Meetings of the Supreme People’s Assembly are usually brief, annual affairs that are intended to approve budgets, formalise personnel changes and rubber-stamp policy priorities set by Mr Kim and the ruling party leadership.

State media did not immediately release details from the current session, which could also approve reshuffles within the North’s Cabinet and State Affairs commission, the government’s highest decision-making body led by Mr Kim.

During the party congress, Mr Kim called for accelerated efforts to build a military arsenal that could viably target US allies in Asia and the American homeland.

The North showcased some of its most advanced strategic weapons during a nighttime military parade, including what appeared to be a new ballistic missile that is being developed to be fired from submarines.

His negotiations with Mr Kim collapsed when the two sides failed to agree on how to lift crippling US-led sanctions in exchange for North’s disarmament steps.

Some analysts say the prolonged sanctions combined with pandemic border closures and natural disasters that wiped out crops last summer are possibly setting conditions for a perfect storm that could destabilise markets and trigger public panic and unrest.

The KCNA said that huge crowds of soldiers and civilians gathered at a state-organised rally in Pyongyang where they vowed to extend the “greatest glory” to Mr Kim and “thoroughly carry out” the decisions made by the party congress.

Mr Choe, during a speech at the event, called for party members, government officials, civilians and the military to “thoroughly arm themselves with the main idea and main spirit of the (party congress) and bring about substantial success and progress in the socialist construction with redoubled revolutionary enthusiasm”, the agency said. –AP