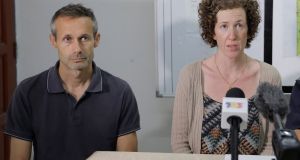 Nora Quoirin's father Seabastien and mother Meabh at a press conference during the search for their daughter. Photograph: Royal Malaysia Police/Handout via Reuters

The family of Nóra Quoirin have thanked the authorities in Malaysia for their help in investigating her disappearance and say they are “struggling to understand” the events surrounding her death.

“The initial postmortem results have given some information that help us to understand Nóra’s cause of death. But our beautiful innocent girl died in extremely complex circumstances and we are hoping that soon we will have more answers to our many questions.

“We are still struggling to understand the events of the last 10 days,” the family said in a statement on Friday.

“We would like to thank the Malaysian authorities for their ongoing support and cooperation with international governments and police as the criminal and missing persons investigations continue.

“We will be bringing Nóra home where she will finally be laid to rest, close to her loving families in France and Ireland.”

Nóra’s unclothed body was discovered in a ravine by a stream on Tuesday, following an intense 10-day search. Malaysian police on Thursday announced partial results of a postmortem examination which indicated that the 15-year-old died from a haemorrhage of the intestine caused by stress and hunger.

Malaysian media reported that Irish and French police who observed the postmortem on the body were satisfied with the work of the local pathology team.

The Malay Mail quoted the Negeri Sembilan police chief, Mohamad Mat Yusop, as saying: “There is no request from Ireland to do a second post-mortem.

“In fact, the liaison police officer from France was ‘very’ satisfied with the pathologist’s work.”

Mr Mohamad was referring to the pathologist from Kuala Lumpur Hospital¸ Mr Siew Sheue Feng, who led the team.

A Garda spokesman said it would not comment on the matter as it was outside the Irish jurisdiction.

Malaysia’s deputy prime minister, Wan Azizah Ismail was briefed on Friday by the Negeri Sembilan police chief on Friday and then went to meet members of Nóra’s family at the Dusun resort.

Dr Wan Azizah, who studied medicine at the Royal College of Surgeons in Ireland, told reporters after meeting the Quoirins that the family had asked for privacy.

“It is very sad because they came for a holiday and for this tragic thing to happen,” she said.

In their statement, the family said: “Today the Deputy Prime Minister of Malaysia and the Minister for the State paid their respects to our family. We had the opportunity to thank them for everything that the Malaysian government, police, search and rescue teams, local people and volunteers have done to help us. Tragically, as we know, this wasn’t enough to save Nóra.”

The Lucie Blackman Trust, which is supporting the family, said ongoing investigations in France would continue “as is standard practice in overseas cases involving French citizens”.

The trust added: “Whilst investigations are underway we continue to urge an end to public speculation.

“The police hotline remains open, and the family are still seeking any information from the public that can help to provide clarity on the events of the last 10 days.

“The Lucie Blackman Trust will continue to support the family for as long as they need it with practical support such as repatriation and any other support required.”

The charity added no payments were made in respect of the reward in connection with the discovery of Nóra’s body.

Minister for Justice Charlie Flanagan extended his sympathies to the girl’s family on Thursday evening, saying her disappearance and death was “every parent’s worst nightmare unfolding”.

Speaking in Carrick-on-Shannon, Co Leitrim on Thursday evening, Mr Flanagan said: “As a father of two daughters myself, like I am sure every parent in the country, our hearts go out to the family. At this time of huge grief we can only wish them well for the future.”

Asked whether there was now any role for gardaí in investigating the tragedy, Mr Flanagan said he was pleased a Garda liaison officer was in Malaysia assisting the family and liaising with local police.

The Malaysian ministry of foreign affairs released a statement on Friday saying France had conveyed its appreciation for “Malaysia’s relentless efforts” to locate Nóra.

“The French minister expressed his gratitude to Malaysia, in particular to the Malaysian authorities for the relentless efforts to locate Nora Anne Quoirin, following her disappearance from the Dusun Eco Resort in Seremban on 4 August, 2019, until the discovery of her remains on 13 August, 2019.

On Thursday, Nóra’s uncle, Pacôme Quoirin said the family still had questions around the investigation.

“It is important that the criminal hypothesis not be excluded on the basis of incomplete information.

“How could she have survived for five days in the jungle without food or water, if you believe the theory that she left the hotel on her own?...We remain very dubious.”

Mr Quoirin said the family did not question the information announced by Malaysian police.

“Her death was caused by a haemorrhage, as they said. But what were the conditions that led to it? The findings that were announced in no way discredit a criminal act. She could have been kidnapped and fed at the beginning. There is insufficient evidence to jump to definitive conclusions.”