Journalist and broadcaster Matt Cooper has travelled to North Korea to research a book and is among a delegation which includes retired US basketball player Denis Rodman. 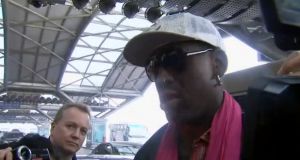 Broadcaster Matt Cooper (left) appears in the frame as Dennis Rodman is interviewed by journalists in Beijing. Image: Sky News

Journalist and broadcaster Matt Cooper has travelled to North Korea to research a book and is among a delegation which includes retired US basketball player Denis Rodman.

Cooper has travelled in a “personal capacity” to research his book and is also involved in making a documentary about the story of Rodman’s visit, a spokesman for bookmaker Paddy Power said today.

The bookmaker has been “working with him” to arrange the visit, which coincides with Rodman’s trip there to play basketball for North Korean leader Kim Jong-un’s birthday with other US players.

Just before Christmas, Paddy Power withdrew sponsorship of Rodman’s event, saying this was as a result of general condemnation of Pyongyang. This followed the rare public purge of leader Kim’s powerful uncle Jang Song-thaek, who was executed last month.

The company said it “took a back seat” after those events but would still “honour all of its contractual obligations”.

Cooper’s employer Today FM confirmed he was travelling to North Korea in an “independent capacity” and had taken “annual leave” from the station, where he presents The Last Word.

Cooper was spotted today when he was filmed by Sky News among the delegation at Beijing airport where Rodman was being interviewed by reporters, en route to Pyongyang.

Rodman said it was “not his job” to discuss human rights with the North Korean leader, his “friend”.

Rodman was flying out with a team of former US National Basketball Association (NBA) players for the match against a North Korean basketball team to mark the dictator’s birthday on Wednesday.

“That’s not the right thing to do. He’s my friend first. He’s my friend... I love him,” Rodman told reporters when asked about challenging the leader on human rights issues.

“That’s not my job,” he said. “The only thing I am doing right now, I am only doing one thing, this game is for his birthday. It’s for his birthday. And I hope that if this opens the doors and we can actually talk about certain things, then we can do certain things - but I am not going to sit there and go in and say ‘Hey guy, you’re doing the wrong thing’.

“Whatever he does political-wise, that’s not my job. I’m just an athlete, an individual who wants to go over there and play something for the world. That’s it.”

Asked whether he was aware of hundreds of thousands of political prisoners locked up in North Korea, he said: “Are you aware that lots of people in America is locked up like that too? I’m not a president, I’m just a guy.”

Rodman said he will not interfere in the country’s politics. “People always say that North Korea is like a really communist country, that people are not allowed to go there,” he told reporters. “I just know the fact that, you know, to me he’s a nice guy, to me.”

This is Rodman’s fourth trip to the North Korean capital, Pyongyang. On his earlier trips he spent time dining as a guest of Kim, with whom he says he has a genuine friendship.

Rodman said upon his return from that trip that Kim wanted to receive a call from US president Barack Obama, an avid basketball fan. The White House has said the US has direct channels of communication with North Korea and declined to directly respond to Rodman’s message.