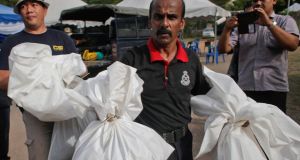 Malaysian security forces discovered a total of 139 graves, most containing several sets of remains, at 28 human trafficking camps near the Thai border. The identifies of the victims was not yet known, whether they are Rohingyas or Bangladeshis, as exhumation works had just begun. The discovery of the mass graves comes amid international outcry over the thousands of Rohingya refugees thought to be adrift in South-East Asian waters. Photograph: Fazry Ismail/EPA

Malaysian police have begun the grisly process of exhuming the bodies of migrant workers held in jungle camps by human traffickers, while many more migrants from Bangladesh and Burma face an uncertain future, despite efforts to combat human smuggling.

There are 139 suspected graves in the mountainous jungle along a 50-kilometre stretch of border between northern Malaysia’s state of Perlis and southern Thailand’s Songkhla province, used as a transit point for migrants and refugees. Most of those who died were believed to be members of Burma’s persecuted Rohingya Muslim minority and impoverished migrants from Bangladesh, who were being held for ransom.

Malaysian police have confirmed that the camps were being used for human trafficking, and details of conditions are slowly emerging.

Burma’s Rohingya Muslims are a stateless people of 1.1 million who are persecuted by the country’s Buddhist majority. Deadly clashes in the western state of Rakhine have seen 140,000 driven from their homes and forced to live in camps, while another 100,000 have fled by sea.

Some of the migrants were apparently held at the camps in cages made of wood and barbed wire.

“We think the migrants were imprisoned in these wooden pens...They were not allowed to move freely and traffickers kept watch at sentry posts,” said Malaysia’s inspector general of police Khalid Abu Bakar.

“Some of the camps found showed that they have been occupied since 2013, and the latest two camps were abandoned two to three weeks ago,” Mr Khalid told the state news agency Bernama. “The police are unable to confirm whether all the graves contain human remains as the digs have not ended as yet.”

Thailand began the crackdown on the jungle routes used by smugglers to move the migrants to Malaysia earlier this month, and many have ended up going by sea in rickety boats, with thousands drifting as no country wanted to take them in.

Malaysia and Indonesia said yesterday they would offer shelter to 7,000 “boat people” adrift at sea in rickety boats but made clear their assistance was temporary and they would take no more, and they expected the international community to help. Thailand will not take in migrants, although it has agreed to help those adrift.

More than 3,000 migrants have landed so far this month in Malaysia and Indonesia. Together with Thailand, they have pushed away many boats that approached their shores despite appeals from the United Nations to take them in.

There are also dozens of Bangladeshis stranded at sea. While they have more immediate concerns, they also have to deal with fear about what kind of reception they would get at home if they were repatriated.

Bangladesh’s leader, Sheikh Hasina, said those seeking to leave the country in illegally should be punished along with the human traffickers who facilitate their escape.

“Side by side with the middlemen, punishment will have to be given to those who are moving from the country in illegal way,” Hasina was quoted as saying bu Bangladesh’s state media. “They are tainting the image of the country along with putting their lives in danger.”

Authorities are preparing to repatriate 208 Bangladeshi citizens who were rescued by the Burmese navy in that country’s territorial waters, according to the state-run Global New Light of Myanmar newspaper.