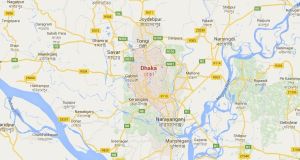 Attack in Dhaka came two days after a university professor was killed in a similar fashion on Saturday in an attack claimed by the Islamic State. Image: Google Maps

Suspected Islamist militants hacked to death two people, including an editor of a transgender magazine, in the Bangladeshi capital on Monday, police said.

The attack came two days after a university professor was killed in a similar fashion on Saturday in an attack claimed by the Islamic State.

One of the victims, Julhas Mannan, ran a transgender magazine “Rupban”, a police official said. He said three people came to their apartment in Dhaka posing as couriers and attacked them with sharp weapons.

Further details were not immediately available.

The Muslim-majority country has seen a surge in violent attacks over the past few months in which liberal activists, members of minority Muslim sects and other religious groups have been targeted.