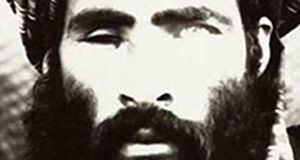 Mullah Omar: the elusive leader of the Taliban is believed to be dead. Photograph: The New York Times/FBI

Afghanistan said yesterday that Mullah Omar, the elusive leader of the Taliban movement fighting to topple the government, died more than two years ago.

The announcement came a day or so before a second round of peace talks had been tentatively scheduled, and news of his fate could deepen Taliban divisions over whether to pursue negotiations with Kabul and who should replace him.

Mr Omar had not been seen in public since fleeing when the Taliban was toppled from power by a US-led coalition in 2001, and there has been speculation for years in militant circles that he was incapacitated or had died.

“The government . . . based on credible information, confirms that Mullah Mohammad Omar, leader of the Taliban, died in April 2013 in Pakistan,” the presidential palace said in a brief statement, without specifying what the information was.

“The government of Afghanistan believes that grounds for the Afghan peace talks are more paved now than before, and thus calls on all armed opposition groups to seize the opportunity and join the peace process.”

The Taliban’s regular spokesman could not be reached for comment.

The White House said it was aware of reports of the death and believed them to be “credible”. Spokesman Eric Schultz said US intelligence continued to look into the matter.

Since 2001, Mullah Omar had been little more than a ghost, almost as elusive to his own rank and file as to the Taliban’s enemies.

“I have asked around a lot and there was no military strategy coming from Mullah Omar, not in 2001, not in 2005, not in 2010,” said Bette Dam, a journalist and author who has been researching a biography of Omar for several years.

That remove from power appears to have made it possible for the group to keep Omar officially alive long after his death, putting out an annual message for the Eid holidays in his name, for example.

It also makes it hard to judge exactly how his absence will affect the group’s strategy, or the prospects for embryonic peace talks with the Afghan government.

At a time when the movement was at odds about whether to pursue those negotiations and more extreme commanders were already being lured away to join Islamic State, Omar’s name was used by top commanders to unite feuding factions. Now, that might change – and a struggle over the succession could ensue.

He said news of his death could have been leaked by factions opposed to peace talks, after the latest message issued in his name this month appeared to endorse the negotiations.

It is also possible Omar could still be alive. His obituary has been written several times before, including twice in 2011.

“The timing of the release of this information needs to be taken very seriously,” said Ms Dam. “There are several groups within the Taliban and outside who want to make sure they have a share in any peace or any power sharing.”