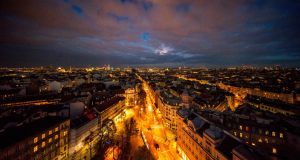 The bestselling author of espionage novels, John le Carré, often places his spies in Vienna. So does Kim Jong Un.

The Austrian capital has long been a smuggling hub for the heavily sanctioned North Korean regime and a gateway to Europe for the small number of spooks it has based on the continent. But the city could grow in importance to Pyongyang if US president-elect Joe Biden convinces Kim to consider rolling back his weapons program: As home to the United Nations’ top nuclear watchdog, Vienna would potentially play a monitoring role.

Interviews with a senior western intelligence official with knowledge of North Korea’s espionage network paint a vivid picture of its activities in Europe, including the presence of as many as 10 Ministry of State Security agents. At least one agent operates regularly out of Vienna, according to the official.

Besides basic information-gathering, the agents’ primary mission is keeping the regime’s own embassies and diplomats under surveillance. They also oversee illegal procurement operations, carry out investigations into missing people and retrieve cadres who have been summoned home.

Austria is central to those activities, according to the intelligence official, who asked not to be identified. While the Kim family’s travel and studies in Switzerland have long been the subject of discussion, less known are their ties to its German-speaking neighbor.

At times desperate and clumsy, North Korea’s operations in Austria and elsewhere in Europe have grown more imperative for Kim as his country struggles under sanctions. North Korea’s economy is headed this year for its biggest contraction in more than two decades, according to Fitch Solutions, due in part to Kim’s decision to close borders during the coronavirus pandemic. On top of that, natural disasters including floods wiped out farmland.

North Korea’s trade with China, by far its largest economic partner, shrank 73 per cent through September and is on course to plunge 80 per cent for the year, the Korea International Trade Association said in late November. Kim issued a rare warning for the economy in August, telling party leaders the country “faced unexpected and inevitable challenges,”

For years Austria has been a source of items that can’t be legally imported by the regime, including Glock pistols and a cable car that Kim rode on with South Korean President Moon Jae-in during a 2018 visit to a North Korean ski resort.

A spokesperson for the Austrian Interior Ministry said the agency couldn’t comment on specific cases or operations for legal reasons. The ministry, which oversees the domestic intelligence agency, investigates any crimes that are detrimental to Austria, the spokesperson said. A spokeswoman for Chancellor Sebastian Kurz directed a request for comment to the ministry.

Two people who picked up the phone in separate calls to the North Korean embassy in Vienna were unable to comment, and an email to the embassy went unanswered.

The country’s annual intelligence report acknowledged that “intelligence actors operate both in Austria and against Austrian interests” due to local business networks plus easy access to the European Union and multinational organizations. Such ties are one reason Vienna has so often featured in Le Carré espionage novels, such as “A Perfect Spy.”

Its role could deepen if Biden has more success than current president Donald Trump in getting Kim to agree to reduce his nuclear arsenal, a likely pre-condition to a face-to-face meeting. The locally based International Atomic Energy Agency would almost certainly play a part in ensuring North Korea abides by any pledge to disclose or shut weapons-related facilities.

Close and frequent contact would be needed to carry out the detailed work of placing a freeze on North Korea’s nuclear system. This requires closing labs, reactors and fissile-materials production sites, as well as installing monitoring equipment in one of the world’s most secretive and paranoid states. As well as potentially allowing IAEA teams into North Korea, it would mean more North Korean officials traveling regularly to Vienna.

“Once a political agreement has been reached among the countries concerned, the agency is ready to return promptly to the DPRK,” the IAEA said in a September report, using North Korea’s formal name.

European cities with North Korean missions such as Geneva and Stockholm have often hosted meetings between representatives of the US and North Korea, who have never had official relations. In March, Kim named Choe Kang Il – one of his top experts on US affairs – to succeed his uncle, Kim Kwang Sop, as ambassador to Vienna.

Other high-ranking officials, including members of the secretive personal secretariat, which has direct links to the Kim family, have traveled through Austria, where they shopped and worked on illegal procurement, according to the intelligence official. In one instance, agents were able to search a rented apartment because the North Koreans had failed to put it under diplomatic cover.

According to the UN, North Korea uses its embassies and overseas missions for “illicit activities for generating illegal revenues” that include trade in luxury goods forbidden under sanctions and procuring banned equipment essential for its nuclear program. North Korea has generated billions of dollars a year dealing drugs, selling weapons, counterfeiting currencies and exploiting guest workers, says the International Network for the Human Rights of North Korean Overseas Labor.

For poorly paid North Korean diplomats in Europe, smuggling is not only a service to the regime. It can be a means of sustenance.

Tae Yong-ho – a former North Korean deputy ambassador to the UK, who defected to South Korea in 2016 – said in a phone interview the regime’s envoys are “required to earn money” and face harsh criticism if they fail to meet quotas. “The pressure is tremendous,” said Mr Tae, who was elected to a South Korean parliamentary seat in April.

Austria is home to about 100 North Korean nationals and has historically housed one of the regime’s largest embassies in Europe. Agents and some bomb material connected to the downing of Korean Air Flight 858 in 1987 passed through its doors.

Kwon Yong Rok, described by the North Korea Leadership Watch website in 2009 as the one-time central executive for the country’s Vienna-based financial management, was named in a 2012 UN Security Council report for being part of a scheme to export illicit goods including Mercedes Benz E-class E350 series cars.

Mr Kwon has not publicly commented, and it’s unclear where he is now. North Korea provides few public details of top officials, especially those who may be involved in questionable activities overseas and could be at risk of U.S. sanctions. A search of North Korea’s official media for the past 20 years shows no mention of Kwon.

Another member of Kim’s inner circle, whom the intelligence official declined to name, recently traveled through Austria’s capital and may still be in Europe.

The regime’s last financial institution in Europe, Golden Star Bank, was based in Vienna before it was ordered to shut more than a decade ago. Its network of contacts and clients remained, however, making Vienna a continued focal point for money flows linked to attempts to get around sanctions.

The blocked sale of two luxury yachts in Italy in 2009, which investigators suspected were destined for Kim’s family during Kim Jong Il’s rule, shed light on how North Korea tries to procure sanctioned goods via Austria, the person familiar with the operation said. Several embassy staff in Vienna each acquired €50,000 ($70,000 at the time), wired through multiple offshore entities based in places such as the Cayman and Virgin Islands.

The diplomats transferred the money to an Austrian businessman, who forwarded it to companies that purchased the boats. UN Security Council reports published in 2012 and 2016 found the businessman had been involved in an array of other orders for items ranging from Mercedes cars to pianos.

In more recent years, security services have intercepted rented crates at Austrian ports filled with medicine, wine, liquor and other luxury items that were traced back to embassy staff, said the person familiar with the activities. In 2010, a MSS officer appeared in Vienna looking for equipment typically needed in the aftermath of an earthquake and on another occasion second-hand ski lifts and gondolas were purchased for a resort in Masikryong via a Chinese shell company, they said.

The North Koreans tasked with such missions often live in fear, dreading that one misstep that could prompt a return to their home country and its political prisons. Kim, and his father before him, has used arbitrary detention as punishment for officials he deems to have stepped out of line. In some cases he has had them killed, including his own uncle, whose execution he ordered.

Defectors from North Korea have spoken frequently about how the constant pressure breeds paranoia, infighting and mistrust.

The intelligence official recalled an incident involving a group of North Korean diplomats who were eating at a restaurant in Austria.

When one diplomat stood up suddenly and rushed toward the rear of the building, another member of the party jumped to his feet and chased him clumsily through the restaurant.

But it turned out the man was not trying to make a run for it -- he just needed the toilet in a hurry. Both men later sheepishly returned and sat down.– Bloomberg