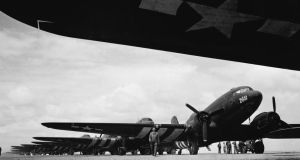 India has permitted the US to recover the remains of several hundred of its military aviators who crashed in its remote northeast region in the second World War, during hazardous missions over the Himalayas against the Japanese military.

Indian officials said teams from the US Defence POW/MIA Accounting Agency would be given access to Arunachal Pradesh, a region bordering Burma, where 416 US pilots and navigators are believed to have crashed and died between 1943-45.

The agency was consistently denied permission by the previous Congress Party-led government to travel to Arunachal, as it was wary about China’s reaction to the presence of US military and associated personnel in the region.

China claims Arunachal as part of southern Tibet, in its long-running territorial dispute with India.

The two went to war over this unresolved boundary in 1962. India came off worse in this encounter, and has been wary of China ever since.

However, prime minister Narendra Modi’s Hindu nationalist Bharatiya Janata Party government rejected this assumption and allowed the agency - which was under pressure from ageing relatives of the deceased pilots - access to Arunachal, to recover the US airmen’s remains.

Using maps, compasses and intermittent radio signals to navigate, they negotiated their transports - mostly Douglas DC-3 Dakotas - over 15,000ft high ridges, in headwinds of 160km/h, on a run that came to be known as the “Hump”.

On a single day in 1945, US pilots made more than 1,000 round-trips, ferrying a payload of more than 5,000 tonnes of food, medical supplies, arms and ammunition.

This route was later dubbed the “aluminum trail”, after more than 500 aircraft crashed in the thick jungle due to icing, running out of fuel or getting lost and flying into hillsides.

Many of the overworked pilots suffered extreme exhaustion and died after losing control of their aircraft.

Over decades, families of the dead pilots and teams from the US Joint POW/MIA Accounting Command in Honolulu, which executes investigation and recovery missions for missing US military personnel, managed to identify several crash sites in Arunachal.

They estimated the remains of some 416 US pilots lay scattered across the mountainous and thickly-wooded region and wanted them brought home for proper burial.

Some of the crash sites, however, were across the border in Burma and some were even in China, and thus inaccessible to US reconnaissance teams.

Repeated requests by the US embassy in New Delhi to the Indian government to send teams to retrieve these pilots’ remains were consistently stonewalled.

At least two planned US missions to Arunachal in 2010, and another a year later, were cancelled after India refused them permission to travel to the northeastern state on nebulous grounds.

The federal government’s problems were further aggravated by Arunachal’s internal security situation and past history.

Like several adjoining northeastern states - many of them wracked by insurgencies - Arunachal remains closed to foreigners, particularly US nationals.

Any foreigner wanting to visit requires special protected area permits issued by the federal home ministry that are hard to obtain.

The denial of access to foreigners since the mid-1960s stems from an official belief, propagated by security agencies, that the region’s many armed insurrections had been instigated by Jesuit missionaries from the US, descendants of those who came to the region in the 19th century.