Hopes for peace appear to be slipping away in Afghanistan

Attacks this week, including on maternity unit in Kabul, leave process hanging by thread 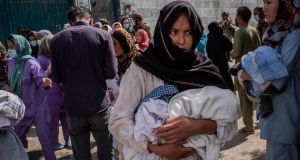 A woman carrying a baby stands among a crowd near a maternity hospital attacked on Tuesday, in Kabul, Afghanistan. Photograph: Jim Huylebroek/The New York Times

In the wake of a devastating attack in Kabul on Tuesday on a maternity unit that saw gunmen shoot women in labour, new mothers and their newborn babies, hopes of a peace process for Afghanistan appear to be slipping away as both the government and Taliban ramp up military operations.

The Taliban on Thursday attacked a city in Afghanistan’s east, killing five civilians and at least one soldier, and injuring dozens more with a truck bomb. The bomber had been targeting an army base in Gardez, but the explosives detonated before he reached it, leaving a too-familiar tangle of rubble and bodies.

It was the first attack by the Taliban in an urban centre since the group signed a deal with the US in late February agreeing the departure of American troops in return for security guarantees. This was meant to pave the way for intra-Afghan negotiations, but the process was crumbling before talks even began.

The militants said Thursday’s bomb was retaliation for government statements blaming the Taliban for the hospital attack and for president Ashraf Ghani’s announcement that he had put security forces on the offensive, after months of an “active defence” stance in preparation for the possible peace talks.

The Taliban have denied any role in the Kabul attack, which killed 24, and condemned the slaughter. But they also said they were ready to return to the battlefield in full force.

“We have the upper hand in the war, we are not tired of war and we are ready,” Taliban spokesman Zabihullah Mujahid said in a radio interview. “When we say the issue should be solved through negotiations, it doesn’t show our weakness.”

Senior US officials, heavily invested in the peace process, appeared to urge the Afghan government to accept the Taliban’s position.

The US special peace envoy Zalmay Khalilzad noted the group’s denial and called on the Afghan government and Taliban to work together to fight terrorism; US secretary of state Mike Pompeo made similar comments.

But even if the Taliban did not dispatch the suicide bombers, their decision to keep up an intense pace of attacks against government forces in recent months – even while the movement was nominally preparing for peace – may have facilitated the violence.

“The Taliban have created an enabling environment for this kind of attack. If they had agreed a ceasefire it would be much harder for any group to carry out this kind of attack,” said Kate Clark, co-director of the Afghan Analysts Network.

“What the Taliban does [with attacks nationwide], takes up the bandwidth of the security services. Also the general insecurity is a sea in which other [militant] groups swim.”

Clark added that Taliban intelligence was relatively strong, and had they chosen to stop fighting and focus attention on preventing attacks, they might have been able to stave off violence planned by another group.

The peace process had already been faltering over disputes about a prisoner release plan, and Afghan government anger about increased Taliban violence. Even the US had expressed anger about the scale of attacks, saying they violated a secret verbal commitment made on the sidelines of the withdrawal deal.

But with the withdrawal of American troops already under way, and presidential elections looming, US officials may feel they have no choice but to try to double down on a peace process they promised Afghans and Americans would be the fruit of their departure, regardless of realities on the ground.

“One question that has hung over the process from the start is whether the Taliban had serious intent to talk, and I just don’t think we have seen that,” Clark said. “My fear all along was that there wasn’t really a plan B in Washington, for what happens if the Taliban don’t really want to talk.” – Guardian