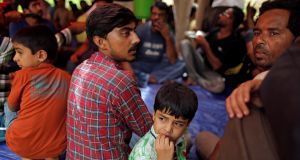 There is growing concern in Sri Lanka for the welfare of hundreds of refugees who have been targeted by mob violence in the wake of last week’s Islamic State terror attack.

More than 1,000 refugees, mainly Ahmadi Muslims who had sought asylum in Sri Lanka in recent years having fled persecution in Pakistan, are now under police protection in mosques and other buildings as communal tensions rise, according to local human rights observers.

The country is still reeling from bomb blasts on Easter Sunday that killed over 250 people, and injured over 400 others, with terrorists targeting churches and luxury hotels.

Political and religious leaders appealed for unity and peace on Sunday as they attended a televised Mass in the capital Colombo. However, human rights activists have reported increased attacks and harassment of migrants, especially Pakistani Ahmadis but also Christian, Shia, Sunni and atheist refugees.

The attacks and threats are “continuous”, according to one local observer who said yet another refugee family had on Saturday been forced out of their home into a police station, leaving their belongings behind.

Some 1,600 refugees and asylum seekers are registered with United Nations Refugee Agency (UNHCR) and “in the last few years they have been living in peace, with no major incidents”, said Ruki Fernando, a Colombo-based human rights activist linked to the Irish NGO Front Line Defenders.

But since the Easter bombings there has been an outbreak of threats and violence and hundreds of people have sought shelter in two mosques and a police station – all kept under police guard.

While it was relatively calm on Saturday, Mr Fernando said “police are not yet in a position to guarantee security”. Nor were proper living conditions available to the refugees.

“The state has to take responsibility to provide security, and they have to look at long-term solutions.”

The UNHCR plans to resettle the refugees in other countries once their cases are processed, but there is concern among some Ahmadi Muslims that they could face deportation back to Pakistan, something which would amount to a death sentence, according to human rights activists.

“These people have suffered in their own countries and they came here to escape persecution. It’s very sad they now feel under threat here,” Mr Fernando added.

Rabia Mehmood, South Asia researcher with Amnesty International, who is based in Colombo, said: “Safety of all refugees and asylum seekers in Sri Lanka must be ensured immediately. They must be given protected shelters and support because they are at extreme risk.”

She said Sri Lanka was only a temporary abode for the refugees while their cases were being processed, and it was “heartbreaking to see them under attack, forced out of their homes and displaced now because of their faith and their countries of origin”.

Last Thursday the Guardian reported there were protests outside one building where hundreds of members of the Ahmadi community were sheltering under police protection.

“These people must be pulled out from this place,” a local provincial council member was reported as saying. “We don’t want them.” Signs in English and Sinhala posted outside said: “We don’t need Pakistan refugees.”

Sri Lanka’s prime minister Ranil Wickremesinghe acknowledged the attacks the Ahmadis faced during an interview last week with the Associated Press, and said authorities would work to ensure their safety.

Some people in the port city of Negombo “had become suspicious of foreigners, not of Muslims per se”, he said. “In the heat of the moment a few have been attacked.”

As the investigations continued into the Easter Sunday bombings, Sri Lankan armed police on Sunday launched a search of the headquarters of an Islamist group National Thawheedh Jamaath.

The government has said nine homegrown, well-educated suicide bombers carried out the terror attacks, eight of whom had been identified. One was a woman.

Fifteen people, including six children, were killed on Saturday in a gun battle between police and suspected Islamic militants, a military spokesman said.