The world is still only at the beginning of the coronavirus pandemic, WHO warns 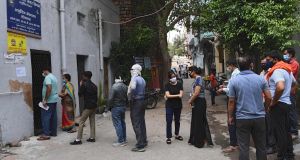 People queue for their turn to undergo Rapid Antigen Test (RAT) for Covid-19 at a government health centre in New Delhi on Wednesday. Photograph: Getty Images

India’s confirmed coronavirus cases surged past 5 million, making it the second country in the world to cross the milestone after the United States, while Brazil recorded its highest one-day death toll in nearly two weeks.

India added over 90,000 new coronavirus cases on Wednesday with a record 1,290 deaths. It brings the total number of recorded Covid-19 deaths in the country to 82,066.

The World Health Organisation (WHO) said the world is still at the beginning of the pandemic and it will take some time to work out how to deal with it.

WHO special envoys on Covid-19 David Nabarro told the UK’s Foreign Affairs Committee the present situation is horrible and grotesque.

He said the outbreak is worse than any science fiction movie, and appears to be getting nastier as cases reemerge in Europe.

Dr Nabarro told MPs: “None of us find the present situation, anything other than horrible grotesque, really embarrassing.

“It’s a terrible situation, a health issue has got so out of control it’s knocking the world into, not just a recession, but a huge economic contraction which would probably double the number of poor people, double the number of malnourished, lead to hundreds of millions of small businesses going bankrupt.”

He added there was also a risk of the pandemic ruining educational opportunities for a lot of children around the world.

Dr Nabarro said: It’s awful. And we really, really are, all of us, deeply saddened and troubled by it.

“But that applies to most people in our world who are all having to make sense of something that they couldn’t imagine.

“It’s much worse than any of the science fiction about pandemics.

“This is really serious — we’re not even in the middle of it yet. We’re still at the beginning of it.

“And we’re beginning to see what damage it’s going to cause the world.

“And it’s getting nastier as we go into this particular phase in Europe of watching the thing come back again.”

His comments came in response to a question from Labour MP Chris Bryant, who asked what he should tell his constituents who believe Covid-19 is just a big conspiracy.

Dr Nabarro said that he understood why people thought such things, and that everyone would love to find a convenient explanation for the virus.

He added: “I think we’ve got to entertain the fact that everybody everywhere is looking for an explanation, and we need to level with them and say ‘we quite understand it’.

“We know how absolutely awful this is for so many hundreds of millions of people.

“Based on my understanding this virus was visited on us at the very end of last year, and we’ve been learning to live with it for this year, and we will make sense of it, and we will be able to work out how to do it, but it’s going to take us quite a bit longer.” – Agencies