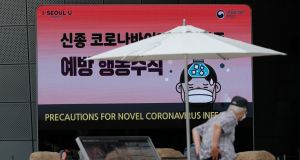 A visitor wearing a face mask walks near a screen displaying precautions against the coronavirus in Seoul. Photograph: Lee Jin-man/AP Photo

The onset of summer has sparked a rise in incidents of “mask rage” in South Korea, as more hot and bothered commuters either refuse to wear face coverings or leave parts of their faces exposed.

In South Korea, Japan and other countries in east Asia, widespread mask wearing has been cited as one possible explanation for the region’s relative success in bringing the Covid-19 pandemic under control.

South Korea, one of the first countries outside China to be affected by the virus, flattened the coronavirus curve in April, although it is now struggling with dozens of daily cases, mainly in and around the capital Seoul.

To avoid a second major outbreak, the government in June required masks to be worn on all buses and subways, and inside taxis, with drivers permitted to refuse passengers without face coverings.

As a result, more people are refusing to wear them, or are positioning them across their chins so they leave their mouth and nose exposed.

The practice, nicknamed “tuk sk” – tuk is Korean for chin – has sparked dozens of incidents of mask rage on public transport, according to South Korean media.

Police said they had recorded 840 fights in June, many of them involving bus drivers who remonstrated with passengers who refused to mask-up, according to the Yonhap news agency.

All but one of the 43 perpetrators facing legal action were men, Yonhap said, adding that most were in their 50s and 60s.

The incidents included a woman who was briefly detained after she argued with other subway passengers who demanded that she wear a mask, and a man who was held by police after assaulting a bus driver and a fellow passenger for insisting that he cover his face.

Fears of a heatstroke pandemic have prompted firms in neighbouring Japan, where temperatures are expected to soar in July and August, to develop “cool” masks made from hi-tech materials.

The sportswear maker Mizuno is selling masks made from fabrics usually found in its range of swimsuits and athletics apparel, while the material used in Yonex’s Very Cool range includes xylitol, which, it says, allows the mask to dry quickly.

“As people spend more time wearing masks to protect them against the coronavirus, we hope our technology will enable users to keep cool during the hot weather, even if just a little,” a spokeswoman for Yonex, which makes gear for badminton and tennis, told the Kyodo news agency.

Last month, long queues formed outside Uniqlo stores ahead of the release of face masks made from the clothing firm’s lightweight summer fabric. Reports said the items sold out within hours.

Other retailers have taken the theme a step further, with one knitwear maker developing chilled cloth masks with pockets for ice packs that it says keep the wearer cool for up to two hours.

Experts have warned that wearing masks in extreme heat could cause breathing difficulties, raised heart rates and dehydration.

The Japanese Association for Acute Medicine advises people to remove their masks when appropriate and to drink water at regular intervals. – Guardian

1 Tony Holohan stepping back from role as chief medical officer
2 Pygmalion pub mired in weekend social distancing row
3 All change at the unique Ashford Castle in era of Covid-19
4 Bobby Storey: The IRA's planner and enforcer who stayed in the shadows
5 Several factors pushing Boris Johnson towards a Brexit deal with Brussels
Real news has value SUBSCRIBE