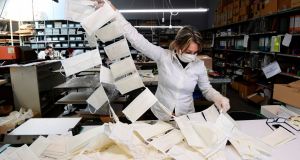 Italy’s death toll from coronavirus has overtaken that of China, where the virus first emerged. Hospitals in Italy said they were being overwhelmed, while the government is prepared to prolong emergency lockdown measures.

A total of 427 deaths were registered in Italy over the past 24 hours, bringing the total nationwide tally to 3,405 since the outbreak surfaced in the country on February 21st. China has recorded 3,245 deaths since early January.

However, Italy has far fewer confirmed cases – 41,035 as of Thursday, against 80,907 in China. Officials and experts believe the total number of infections in Italy is significantly higher than the official figures, with testing largely limited to those arriving for hospital care. The country’s large elderly population, who are particularly vulnerable to the virus, is also seen as factor for the high number of fatalities.

The worldwide death toll from the Covid-19 pandemic has crept towards 10,000 as the total number of infections topped 220,000, including nearly 85,000 people who have recovered.

The pandemic has stunned the world and drawn comparisons with devastating periods such as the second World War and the 1918 Spanish flu.

UN chief António Guterres warned that a global recession, “perhaps of record dimensions”, was a near certainty.

“This is a moment that demands co-ordinated, decisive, and innovative policy action from the world’s leading economies,” Mr Guterres told reporters via a video conference. “We are in an unprecedented situation and the normal rules no longer apply.”

Coronavirus is killing one person every 10 minutes in Iran, an Iranian health ministry spokesman tweeted on Thursday, as the death toll in the Middle East’s worst-affected country from the virus climbed to 1,284.

“Based on our information, every 10 minutes one person dies from the coronavirus and some 50 people become infected with the virus every hour in Iran,” Kianush Jahanpur tweeted.

The government has ordered the closure of schools and universities and banned sports, cultural and religious gatherings. Iran has also closed four holy Shia shrines.

The virus has also dampened Iran’s celebrations for the Nowruz New Year that begin on Friday. Authorities have urged people to stay home and avoid travelling during the holiday period to help contain the spread of the virus.

“With 149 new deaths in the past 24 hours, the death toll from the virus has reached 1,284. Unfortunately we had 1,046 new cases of infection since yesterday,” Mr Raisi said on state television.

Nuclear energy chief Ali Akbar Salehi told state TV on Thursday that Iran would not mark its annual day celebrating its nuclear programme next month because of the outbreak.

Meanwhile, China has recorded no new domestic cases of Covid-19, with no new cases at all in the virus epicentre Wuhan or in the surrounding Hubei province, officials said.

The country’s health ministry said early on Thursday that results over the past 24 hours showed 34 new cases, all detected in people arriving from abroad.

Eight new deaths were reported, all in Wuhan.

Of those new cases of infection, 21 were in Beijing, nine in the southern manufacturing centre Guangdong, two in Shanghai and one each in coastal Zhejiang and Heilongjing in the far northeast.

China has only just begun loosening strict travel restrictions within the country, but has stepped-up 14-day quarantine regulations on those arriving in Beijing, Shanghai and elsewhere from overseas, amid expectations of a new influx of students and others returning home.

In Europe, the European Union’s chief Brexit negotiator Michel Barnier has tested positive for coronavirus and his team are following instructions, the French man announced in a video message on social media on Thursday.

“Each one of us has a role to play for all, to win this collective battle, this war against the virus,” Mr Barnier said.

The pandemic has also now reached at least one European head of state: 62-year-old Prince Albert II of Monaco. The palace announced that he had tested positive for the virus but was continuing to work from his office and was being treated by doctors from Princess Grace Hospital, named after his mother.

French health authorities reported 108 new deaths from coronavirus on Thursday, taking the total to 372, the toll rising sharply yet again as the country was in its third day of a lockdown aimed at containing the outbreak. During a press conference, health agency director Jérôme Salomon added that the total number of cases had risen to 10,995, up from 9,134 on Tuesday

The death toll from coronavirus in Switzerland is now 33, health authorities said on Thursday, up from 21 deaths on Wednesday.

Russia has recorded its first death from coronavirus as numbers of cases have more than doubled in the country over the last week, but the country has still shown surprisingly few infections, with 147 confirmed cases as of Wednesday evening.

Starting from next week, all schools will be closed. The government has repeatedly urged Russians to stay home and limit all contacts.

Australia is banning incoming travellers who are not citizens, permanent residents or direct family members of residents. Prime minister Scott Morrison said 80 per cent of cases of coronavirus detected in Australia have been people infected overseas or by direct contact with someone who had been infected overseas. Overseas arrivals are currently expected to self-isolate for 14 days.

New Zealand is closing its border to people who are not citizens or residents from Friday. Prime minister Jacinda Ardern said she had become increasingly concerned that visitors to New Zealand have not been properly isolating themselves for 14 days as required. There are a few exceptions to the new measure, including children and partners of residents.

The US on Thursday raised its travel alert to the highest for the whole world, urging Americans not to go overseas while urging those abroad to return immediately due to the coronavirus outbreak.

US president Donald Trump also invoked the Defence Production Act of 1950 to steer industrial output and overcome shortages of face masks, ventilators and other supplies as hospitals braced for an expected onslaught of cases.

The invocation came as Republican Mario Diaz-Balart of Florida announced that he was the first member of Congress to test positive for the virus. Other members of Congress have self-quarantined, but none have reported positive test results.

The American death toll has risen to 160, primarily elderly people.

Africa will likely see higher numbers of coronavirus cases in coming weeks because of the likelihood some are slipping through the net, the head of a regional disease control body said on Thursday.

The virus has multiplied in Africa more slowly than in Asia or Europe, but 34 nations on the continent have now reported cases.

“We are picking [up] some people but we are also missing some people,” said John Nkengasong, head of the Africa Centres for Disease Control and Prevention, which is a branch of the African Union bloc.

“The situation will get worse before it gets better because the chances are clear that people have slipped through.”

Over the past 24 hours, additional African countries announced aggressive measures to restrict travel and close public spaces. Senegal and Sierra Leone said they would suspend all international commercial flights. The Democratic Republic of the Congo banned all flights from “at-risk” countries and ordered schools and restaurants closed.

Chad, which recorded its first case on Thursday, and Djibouti ordered schools closed, as did Zimbabwe, which has not yet confirmed any cases.

Niger also confirmed its first case of the coronavirus on Thursday, a 36-year-old Nigerien man who had recently travelled to Togo, Ghana, Ivory Coast and Burkina Faso, its health minister said in a statement. – AP/Reuters