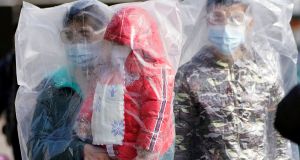 The death toll from a coronavirus outbreak in mainland China rose to 908 yesterday, the National Health Commission (NHC) said.

The number of new deaths yesterday rose 97, the NHC said in a statement on its website, another daily record increase. The central Hubei province, the epicentre of the outbreak, reported 91 deaths yesterday, while in the provincial capital, Wuhan, 73 people had died.

The number of new cases confirmed has stabilised in recent days, and while those numbers gave some grounds for cautious optimism World Health Organisation (WHO) officials warned against reading too much into short-term data.

The novel coronavirus originated in the central Chinese city of Wuhan and has spread rapidly across the country and to 27 countries and territories around the world.

The UK confirmed its fourth case of the new coronavirus on Sunday, after a patient contracted the virus from a previously confirmed British case while holidaying in France.

French authorities said they were retracing all the people who might have been in close contact with a group of Britons who stayed in the Alpine ski resort of Les Contamines-Montjoie.

Five of those tested positive over the weekend. In a further possible link to the resort, Spanish officials said on Sunday a British man had tested positive for the coronavirus in Mallorca after returning from a ski resort in France.

The latest UK case came as 105 British nationals and family members, as well as 95 European nationals, landed at a Royal Air Force base after being evacuated out of Wuhan.

They will be quarantined for 14 days in a conference centre in Milton Keynes.

There have been more than 300 infections identified outside the Chinese mainland so far, with 38 of them confirmed across nine European countries.

In Japan, six new cases have been confirmed aboard the Diamond Princess, bringing the cruise ship’s total to 70. About 3,700 passengers and crew have been quarantined on the ship for the past week after it emerged a previous passenger had tested positive for the virus.

On Sunday, China’s finance ministry said it was allocating €9.37 billion to fighting the outbreak. China is struggling to contain the virus amid rising public anger over its early mishandling of the crisis, particularly since the death of a whistleblowing doctor last week.

Li Wenliang, a 34-year-old medic who was threatened by police after he tried to sound the alarm about the dangers of the novel virus in Wuhan in December, contracted the disease himself and died on Friday. Faced with a massive outpouring of public grief and rage, authorities quickly announced they would launch an investigation into his case.

Officials have also introduced more stringent measures to curb the spread of the pathogen, bringing much of the country closer in line with the lockdown policies that have been in force in Hubei for the past two weeks.

Across much of the country authorities are now imposing self-quarantine orders. In Chengdu, for instance, anyone who has been outside the city limits at any point over the past 14 days must now quarantine themselves at home for 14 days.

Prior to this, the quarantine order was only in force for people who had travelled from Hubei, the outbreak’s epicentre.

Residents are discouraged from leaving their homes and in many compounds people are only allowed go outside once every three days to buy provisions. Visitors, including relatives, are strictly prohibited. The central government is offering cash rewards for people who report any violations of the regulations.

A notice circulated in Chengdu on Sunday said that anyone found violating the rules would not be allowed back into their own homes and would face criminal charges.

“Those who do not co-operate with the registration process will be reported to the public security organs. You will bear all the consequences for your actions,” it said.

Much of the country is still not back to work after the Lunar New Year holiday was extended, and the government is encouraging people to work from home for the foreseeable future where possible.

Foxconn, a major Apple supplier, was due to reopen its plants tomorrow after a week’s delay but authorities informed them over the weekend to remain shut, local media reported.

The Foxconn factories, some of which employ hundreds of thousands of workers, were “high risks”, in the battle to contain the pathogen, safety officials said in a written notice.

“Violation of epidemic prevention and control could potentially result in the death penalty,” the notice said.