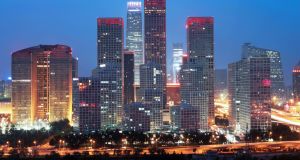 Beijing. In a WeChat article, a Beijing-based website called for readers to share experiences of sexual assault. “Within 24 hours, we have received 1,700 stories regarding sexual harassment,” it said. Photograph: Getty Images

The #MeToo movement has taken on fresh impetus in China after a wave of sexual assault accusations spread across China’s social media, targeting media figures, academics and leading intellectuals.

The accusations are unusual in socially conservative China, where issues such as sexual harassment remain largely taboo and the ruling Communist Party keeps a tight grip on any online traffic it deems potentially destabilising.

Two of the most prominent controversies involve Zhang Wen, a well-known journalist, who was accused of raping a woman after a banquet in May, and Lei Chuang, founder of a major charity called Yi You, who apparently confessed to sexual assault in an online posting.

A 27-year-old legal worker, using the pseudonym Little Spirit, said Mr Zhang had attacked her and that she had proof.

Mr Zhang denied any accusations of sexual assault and said the affair was consensual. He said it was standard practice in intellectual and media circles to “take pictures together, hug and kiss each other after consuming liquor”.

After Little Spirit made her accusation, six other women posted accusing Mr Zhang of sexual harassment and groping.

The “MeToo” hashtag on the Twitter-like service Weibo has been clicked on over 77 million times with 45,000 comments, although most postings have been deleted.

In a WeChat article by the magazine Portrait, the Beijing-based website called for readers to share their experiences of sexual assault.

“Within 24 hours, we have received 1,700 stories regarding sexual harassment,” it said. The post has since been deleted by censors, and clicking on the content triggers a message that it violates internet regulations.

However, of the 1,724 questionnaires which it received, only 20 respondents said they had chosen to report it to police, most of those said they had not received protection from the police and the conviction rate was low.

There was a strong response online.

“All Chinese women should stand up and thank the girls who have made their voices heard in the last couple of days,” Shakuntala wrote.

Another writer called Yaoyao said: “When I was young, I thought forgiveness was a beautiful virtue. After I grew up, I realised that kindness is of no help. When I encounter bad people, I will first report it and complain, but there are always people telling me, ‘It is better to save the trouble. Why do you always find trouble for yourself?’

“Unlimited connivance with bad people can only make society worse. One day I hope that all of those facing dirty behaviour, all of us women, don’t have to worry about poking fingers [...] but we can stand up and speak for ourselves. What is saddest is not the incident itself, but the attitudes of humanity it reflects,” wrote Yaoyao.

Lanteng said the situation reminded her of the situation for the US actorJennifer Lawrence, whose nude photographs were leaked online in 2104.

“She said ‘it was not my fault and I didn’t invite you to look at my body’. Can you imagine what would happen in China if someone said so? I think she would be killed,” said Lanteng.

There were many other comments on WeChat, all of them since deleted, which had messages of support for the victims of sexual harassment.

“Don’t be afraid. You are not the one who should be blamed or the one who did something wrong,” said one posting.