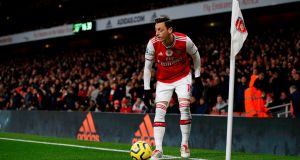 Mesut Özil: ‘Korans are being burnt. Mosques are being shut down. Muslim schools are being banned. Religious scholars are being killed one by one.’ File photograph: Ian Kington/Getty

The broadcaster is the country’s main television distributor of English Premier League football. And the incident makes Arsenal the latest victim of Beijing’s efforts to force western companies to follow its political agenda after the National Basketball Association faced a backlash in China when Houston Rockets executive Daryl Morey tweeted support for Hong Kong protesters.

Arsenal attempted to distance itself from the comments of its popular star on Saturday. In a statement posted on Weibo, a Chinese Twitter-like service, the club said Özil’s remarks were his personal opinion. “As a football club, Arsenal has always followed the principle of not interfering in politics,” noted the statement.

Despite these comments, CCTV removed the match, which was due to air on Sunday at midnight from its broadcast schedule less than 48 hours after Özil, a Germany international with Turkish roots, posted the messages on Twitter and Instagram that blamed China for its persecution of the Uighur ethnic group and Muslim countries for their silent response.

“Korans are being burnt. Mosques are being shut down. Muslim schools are being banned. Religious scholars are being killed one by one,” said the Arsenal player in Turkish tweets. “Despite all this, Muslims stay quiet.”

“What will be remembered years later would not be the torture by the tyrants but the silence of their Muslim brothers,” added Özil.

China has rounded up more than one million Muslims, mostly Uighurs, in reeducation camps in the northwestern region of Xinjiang, according to human rights groups, creating one of the largest ethnic persecutions in recent history. But Muslim countries have been reluctant to criticise Beijing over its Xinjiang policies.

China’s local press and social media has been flooded with criticism of the football star, while the Chinese Football Association (CFA) told local media that it was “extremely angry and disappointed” to hear “a famous soccer player like Özil make such inappropriate remarks”.

“What Ozil said has clearly hurt his Chinese fans and Chinese people in general,” said the CFA. “It is unacceptable.”

Chinese citizens have demanded Arsenal go further and make similar comments to those it made on Weibo via its Twitter and Instagram accounts.

“It is hypocritical for Arsenal to respond only in China but not in its home country,” noted a Weibo comment.