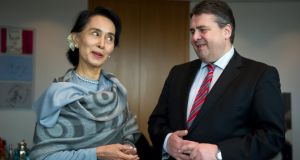 
Prominent human rights lawyer Mo Shaoping was blocked from meeting Germany’s deputy chancellor during his visit to China yesterday, despite Sigmar Gabriel saying ahead of the meeting that he wanted to meet critical voices.

China does not take kindly to visiting dignitaries criticising its poor human rights record, insisting it contravenes its domestic sovereignty.

Human rights is generally a balancing act for Europe’s largest economy when it comes to visit the world’s second-biggest, with over 2,500 companies in China and investments worth more than €39 billion.

Mr Mo told Germany’s DPA news agency that police came to his home with “orders from above” that he had been forbidden to meet Mr Gabriel.

“They must have understood that I had been invited and so came over to say that I could not go,” he said. “This is quite typical. It’s not the first time it has happened . . . It’s regretful (sic), but this is the present situation in China,” said Mr Mo.

The lawyer insisted he had been invited as an ordinary citizen, by a visiting foreign dignitary, and that there was no legal basis for stopping him from attending.


Duty
Mr Gabriel had previously said it was part of a European politician’s duty to meet human rights activists.

He reportedly raised the issue of human rights and the rule of law during hour-long talks with premier Li Keqiang.

Germany has strong trade links with China and Mr Gabriel is on a two-day visit, accompanied by a large delegation of business officials. He raised the issue of human rights and the rule of law during hour- long talks with Mr Li.

Mr Mo has represented some of the most prominent activists in China, including the jailed Nobel Peace Prize winner Liu Xiaobo.

Mr Mo met Germany’s foreign minister Frank-Walter Steinmeier earlier in the month, when he was in China.

While President Xi Jinping’s new administration has introduced economic reforms, it has cracked down on dissent, detaining and jailing activists, curbing internet critics and tightening controls on journalists in what rights groups are calling the worst suppression of free expression in recent years.