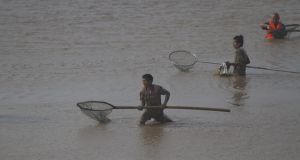 China will impose a ban on fishing in the Yellow River, the country’s second-longest waterway, between April 1st and June 30th every year because of overfishing.

The agriculture ministry said the fishing ban aims to protect aquatic organism resources and biodiversity as excessive fishing threatens fishery resources, and it will cover the river itself, three of its major lakes and 13 tributaries linked to the Yellow River.

For many years, the Yellow River has been devastated by the side-effects of economic expansion, with pollution, overfishing, drought and dam-building responsible for the death of one-third of fish species in the river.

The Yellow River occupies an important place in the national psyche and is frequently referred to as the cradle of Chinese civilisation because of its vast, fertile floodplain.

In 1997, the river ran dry before reaching the sea, prompting an outburst of national soul searching about the effects of pollution on the natural environment.

The Yellow River rises in Sanjiangyuan, which means “source of three rivers”, in the northwestern Qinghai province on the Tibetan plateau and runs 5,500km through nine provinces including Gansu, Inner Mongolia, Ningxia, Shaanxi, Shanxi, Henan and Shandong.

The area is home to a diverse spread of wildlife, including snow leopards, jackals and Chinese grouse.

There have been partial fishing bans on some stretches of the river, including Ningxia and Gansu, but they have been inconsistently observed.

Earlier this month, the government invested 17.6 billion yuan (€2.25 billion) to improve the Sanjiangyuan area, which is also home to the headwaters of the Yangtze and Mekong rivers.

The area has been badly affected by desertification, but efforts to improve grassland and water conservation by reducing the numbers of invasive animals and plants have had a positive impact, and vegetation coverage of desertified land has grown from 33.4 per cent to 39.4 per cent, while wetland coverage has grown by 4.7 per cent, state media reported.

Exceptions would be made for fishing for scientific studies, taming and breeding purposes, once official approval is granted.

Since 2002, there has been a similar ban on China’s longest river, the Yangtze, which runs from March 1st to June 30th and covers the spawning season for most of the river’s aquatic life. It similarly includes the entire river as well as key tributaries and lakes.

The country’s third-longest river, the Pearl River, has had restrictions since 2010, and the government is considering further annual fishing bans on other rivers.