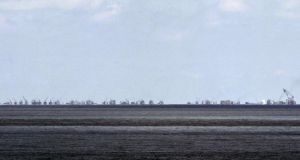 The alleged on-going land reclamation by China at Subi reef is seen from Pagasa island (Thitu Island) in the Spratlys group of islands in the South China Sea, west of the Philippines. Photograph: REuteres

growing tensions in the region.

The Permanent Court of Arbitration in The Hague is expected to rule on July 12th on an arbitration case submitted by the Philippines contesting China’s claim to sovereignty over an area shown on its maps as inside a nine-dash line marking out a large expanse of the South China Sea, which Manila and many in the region contest.

At least €4.5 trillion in maritime trade passes through the South China Sea every year, and the area contains rich oil and gas reserves. As well as the Philippines, China is also at odds with Vietnam, Malaysia, Taiwan and Brunei over its claims there.

China has indicated it plans to ignore the court’s ruling, which would be seen as a snub of international legal codes. Beijing has stepped up its propaganda campaign ahead of the ruling and state media are full of lengthy articles arguing China’s position and slamming accusations that it is trying to bully its smaller neighbours.

However, the US claims that China is trying to militarise the South China Sea by building artificial islands near contested reefs. Beijing responds by attacking US naval patrols and exercises in Asia with allies such as South Korea and Vietnam.

“China has never bullied the smaller claimants on the South China Sea issue,” Xu Liping, a senior research fellow with the National Institute of International Strategy at the Chinese Academy of Social Sciences, was quoted as saying on Xinhua. “Instead, it turns to safeguarding its sovereignty through the international rules and relative laws.”

The newspaper said that Beijing was ready to start negotiations with the Philippines and its freshly inaugurated president, Rodrigo Duterte, but not if the discussions were based on the arbitration ruling however.