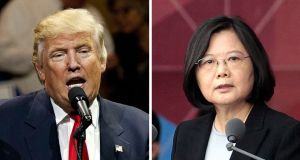 US president-elect Donald Trump speaking during a “USA Thank You” tour event in Cincinatti on Thursday and Taiwanese president Tsai Ing-wen. Trump spoke on Friday with Tsai, a move that will be sure to anger China. Photograph: AP

China lodged a diplomatic protest on Saturday after US president-elect Donald Trump spoke by phone with president Tsai Ing-wen of Taiwan. Beijing blamed Taiwan, the self-ruled island its claims as its own, for the “petty” move.

The 10-minute call has threatened to undermine decades of an uneasy detente the US has had with China over Taiwan.

While there are no formal diplomatic relations between the two, Washington is Taiwan’s most important political ally and it has promised to defend Taiwan if China were ever to attack and supplies Taiwan with arms.

The Kuomintang (KMT) fled to Taiwan after losing the Civil War to the Communists in 1949, and Beijing does not recognise Taiwan as a separate entity, but rather as a renegade province.

China’s foreign ministry said it had lodged “stern representations” with what it called the “relevant US side”, urging the careful handling of the Taiwan issue to avoid any unnecessary disturbances in ties.

“The one China principle is the political basis of the China-US relationship,” it said.

The wording implied the protest had gone to the Trump camp, but the ministry provided no explanation.

The President of Taiwan CALLED ME today to wish me congratulations on winning the Presidency. Thank you!

“This is just the Taiwan side engaging in a petty action, and cannot change the ‘one China’ structure already formed by the international community,” Mr Wang said at an academic forum in Beijing. “I believe that it won’t change the longstanding ‘one China’ policy of the United States government.”

In a tweet, Mr Trump appeared to play down the phone call, saying: “The President of Taiwan CALLED ME today to wish me congratulations on winning the Presidency. Thank you!”

This stance was later apparently contradicted by Alex Huang, a spokesman for Ms Tsai, who said both sides agreed ahead of time before making contact.

Ms Tsai was elected leader of Taiwan in January, following a landslide win over the KMT, which has dominated Taiwanese politics since 1949 although Ms Tsai’s independence-leaning Democratic Progressive Party (DPP) has won three presidential elections this century.

Since her win, relations with Beijing have deteriorated. Mr Trump’s conversation with Ms Tsai was the first contact at such a high level since president Jimmy Carter adopted what is known as the one-China policy, and refuses to recognise Taiwanese independence, in 1979.

Ms Tsai’s office said the phone call touched on strengthening bilateral interactions, the economy and the importance of establishing closer cooperation. The US supported the KMT against the Communists during the Civil War.

The KMT leader, Generalissimo Chiang Kai-shek fled there in 1949, but Washington switched diplomatic recognition to Beijing in 1979.

“Of course, Trump is not yet president, so the contact can be regarded as unofficial. Yet it suggests the possibility that the Trump administration may to some extent alter the long-standing policy of the US government of not maintaining official contact with the Taiwan government.”

Relations between Taiwan and the mainland have always been tense, but under the leadership of Ms Tsai’s predecessor Ma Ying-jeou they became warmer, culminating in an historic handshake between Mr Ma and Chinese president Xi Jinping in Singapore in November last year.

Harry J. Kazianis, director of defence studies at the right-wing think-tank, the Centre for National Interest, said: “While one call phone call certainly can’t replace a clear strategy for Asia or the rest of the world, President-elect Trump has shown guts in shaking up the status-quo on foreign policy issues that are of supreme importance.”

Taiwan is recognised diplomatically by only about two dozen countries, mainly in Central America, the Caribbean and the Pacific, although including the Vatican.