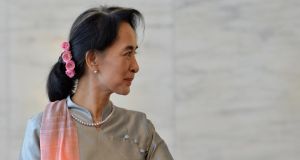 The president removed Shwe Mann and his allies from the leadership of the Union Solidarity and Development Party (USDP) last week in a dramatic shake-up of the country’s political establishment three months before the first free election in 25 years.

Suu Kyi, who leads the opposition National League for Democracy (NLD) that is expected to win the vote in November, and Shwe Mann met for an hour, a ruling party parliamentarian said on condition of anonymity. He said he did not know what they discussed.

Shwe Mann’s relationship with Suu Kyi was regarded with suspicion among some members of the USDP, made up mostly of former military officers, and was one of the motives for his sacking.

He antagonised the military by backing her campaign to change the constitution, which grants Burma’s generals sweeping political power. – Reuters