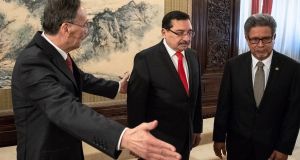 China’s “dollar diplomacy” campaign to win over the handful of small countries that still offer diplomatic recognition to self-ruled Taiwan has scored another victory with El Salvador’s decision to switch its allegiance to China.

After the Communists won the Chinese civil war in 1949, the losing Kuomintang (KMT) under Chiang Kai-shek fled to Taiwan. China claims Taiwan as its sovereign territory and says as a breakaway province it has no right to formal diplomatic ties with any other country.

The vast majority of the world’s nations recognise mainland China and these are tough times for Taiwan’s international profile. Taipei can currently claim Belize and Nauru among the 17 countries with which it has formal diplomatic ties.

Since the independence-minded Tsai Ing-wen came to power in 2016, five countries have jumped ship, including Burkina Faso, the Dominican Republic, Sao Tome and Principe, Panama and now El Salvador, lured by generous aid packages from Beijing.

The pressure is not only on countries. China requires foreign airlines, including American Airlines, Air Canada, British Airways and Lufthansa, not to refer to Taiwan as a non-Chinese territory.

“We are not willing to continue with the money competition with China,” said foreign minister Joseph Wu.

The timing of the news was painful, coming at the end of Tsai’s trip to Latin America, including stops in the US, which angered China.

China is wary of the current US stance on Taiwan, partially because it is unclear.

As historical allies, Washington is committed to defend Taiwan in the event of a Chinese invasion, and in March, Donald Trump signed a Bill encouraging the US to send senior officials to Taiwan to meet Taiwanese counterparts.

As well as fears about Trump’s intentions, adding to the pressure is the fact that Tsai, who leads the Democratic People’s Party (DPP), does not accept the 1992 Consensus.

This controversial deal was agreed between the Communist Party and the KMT, by which they both recognise one “China” but agree to interpret the meaning of this differently.

“President Tsai has made clear that her government does not accept the Consensus, and it’s hard to say whether an alternative framework would be amenable to both sides,” said Lauren Dickey, a researcher at King’s College London.

“But based on the last few years, Chinese officials have found and are likely to continue to find ways to limit or diminish Taiwan’s presence because the DPP government under Tsai doesn’t recognise a framework negotiated between the Chinese Communist Party and the KMT,” said Dickey.

The Global Times ran a triumphant editorial about El Salvador’s move, saying no one was surprised.

“The opportunities to make diplomacy with China are increasing and giving up on those opportunities means countries have more to lose. So Taiwan must pay more to buy diplomatic relations,” the tabloid said.