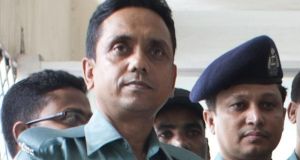 A blogger has been hacked to death by machete-wielding assailants in the Bangladesh capital Dhaka, the second attack in five weeks on a critic of religious extremism in the Muslim-majority South Asian nation.

Washikur Rahman, a secular blogger, was attacked by young religious students on a busy street in the centre of Dhaka this morning, a police official said.

“Police on duty near the spot caught two attackers red-handed with three machetes as they were fleeing the scene after the incident,” police official Humayan Kabir told reporters.

The killing comes just weeks after US secular blogger Avijit Roy was hacked to death while journeying with his wife from a book fair in Dhaka. His wife, Rafida Bonya Ahmed, suffered head injuries and lost a finger in the February 26th attack.

The attacks come amidst a period of political turmoil in the country, with the government and main opposition group locked in a months-long standoff that has created a sense of deepening insecurity across the country.

In recent years, a string of secular-minded writers have been targeted by religious militants in Bangladesh as the government has tried to crack down on hardline Islamist groups seeking to create a Sharia-based state in the nation.

Blogger Ahmed Rajib Haider was killed in 2013 near his home in Dhaka after he led a protest demanding capital punishment for Islamist leaders convicted of war crimes during Bangladesh’s war for independence.

In 2004, Humayun Azad, a secular writer and professor at Dhaka University, was also attacked by militants while returning home from a Dhaka book fair. He later died in Germany while undergoing treatment.

Roy’s wife, Ahmed, blamed her husband’s murder on religious fanatics, and accused police on duty of not doing enough to stop the attack.

Roy’s father also told reporters last week that “apparently no progress” had been made in resolving the case.

Mohammad Habibur Rahman, secretary of the Bangladesh Police Association and superintendent of Dhaka’s police, said the police had been unfairly criticised over their handling of the crime.

“There are plenty of examples where our police force come forward to save people, risking their own lives,” he said.