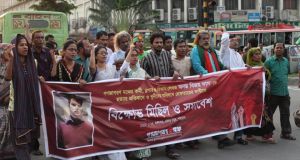 Protesters demonstrate against the killing of blogger Ananta Bijoy Das in Bangladesh. Mr Das was hacked to death by masked assailants in the third such killing in the country in less than three months. Photograph: EPA/STR

A blogger has been hacked to death by machete-wielding attackers in Bangladesh, the third killing of a critic of religious extremism in the Muslim-majority nation in less than three months.

Ananta Bijoy Das, a blogger who advocated for secularism, was attacked by four masked assailants in the northeastern district of Sylhet this morning, senior police official Mohammad Rahamatullah told reporters.

He was also editor of science magazine Jukti, which means “logic”, and on the advisory board of Mukto Mona, a website propagating rationalism and opposing fundamentalism that was founded by US-based blogger Avijit Roy.

Mr Roy himself was hacked to death in February while returning home with his wife from a Dhaka book fair.

His widow, Rafida Bonya Ahmed, suffered head injuries and lost a finger. In an interview with reporters in the US published this week, Ms Ahmed called her husband’s killing “a global act of terrorism”.

The regional arm of the al-Qaeda network has not issued a statement on the killing, but Ansar has ties to AQIS and previously reported on similar attacks which AQIS later took credit for, SITE said.

Imran Sarker, the head of a network of activists and bloggers in Bangladesh, said Mr Das was “a progressive free thinker and a good human being”.

“What is going on? The government will have to end this culture of impunity,” Mr Sarker said.

“Otherwise, the fundamentalists will turn our secular country into another Pakistan or Afghanistan. ”

More than 120 people have died in violent anti-government protests this year and thousands of opposition activists have been arrested in the country.

Militants have targeted secularist writers in Bangladesh in recent years, while the government has tried to crack down on hardline Islamist groups seeking to make the South Asian nation of 160 million a Sharia-based state.

On March 30th, Washiqur Rahman, another secular blogger who aired his outrage over Mr Roy’s death on social media, was killed in similar fashion on a busy street in the capital, Dhaka.

Their deaths followed the killing in 2013 of Ahmed Rajib Haider, who backed calls to impose the death penalty on Islamist leaders accused of atrocities in Bangladesh’s 1971 war of independence.