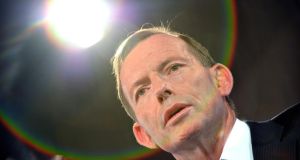 Australia’s prime minister Tony Abbott said questions of marriage were the preserve of the federal government but it was for the supporters of same-sex marriage to bring the matter before parliament. Photograph: Mark Graham/Bloomberg

Australian prime minister Tony Abbott has all but ruled out a referendum on same-sex marriage because referendums are only required for a proposal to change the constitution.

But the prime minister, who is opposed to same-sex marriage, suggested in the wake of the historic Irish vote in support over the weekend, MPs in favour have to decide whether to bring a vote to parliament.

“Referendums are held in this country when there is a proposal to change our constitution and I don’t think anyone is suggesting the constitution needs to be changed in this respect,” Mr Abbott said.

“It’s up to members of parliament who are eager for change to decide whether they want to bring it forward.”

After 62 per cent voted in favour of allowing gay marriage in Ireland, ACT Liberal senator Zed Seselja suggested Australia should also have a referendum even though he does not support same-sex marriage himself.

“If you are going to make such a fundamental change it should go to a referendum. I think there is a reasonable argument for that,” Mr Seselja told the ABC on Sunday.

The prime minister said questions of marriage were the preserve of the federal government but it was for the supporters of same-sex marriage to bring the matter before parliament.

“Plainly this is a matter which could quite properly come before the commonwealth parliament if members of parliament wanted it to be raised,” Mr Abbott said.

In recent years, there have been three bills put to the parliament to allow same-sex marriage but all have failed. The Liberal party has not allowed a conscience vote on the issue in the past.

In December 2013, the high court struck down the nation’s first same-sex marriage laws, introduced by the ACT government. The court found, however, the federal parliament had the constitutional power to introduce a national law allowing same-sex couples to marry.

On Sunday, Mr Abbott said there were a range of views in the parliament and the Liberal party room and in his own family. His sister Christine Forster tweeted in support of the Irish result.

“Inside the Abbott family I’m probably the last holdout for the traditional position, so look, it is a serious issue,” he said.

“If it comes before our parliament again, our party room will deal with it. Our partyroom will decide whether our existing policy continues or not and then we’ll have a good debate.”

Both sides of the Australian marriage equality debate are vowing to step up their efforts following Ireland’s historic Yes vote.

Marriage Equality Australia says the result in Ireland, a country viewed as traditionally conservative and predominantly Catholic, will remove any doubt marriage equality can be achieved in Australia.

But the Australian Christian Lobby has vowed to campaign harder against same-sex marriage in the wake of the result.