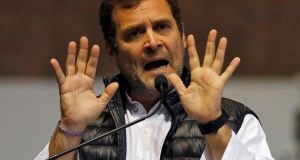 Political leaders in India have exchanged abuse and insults as parties prepare for general elections, which are scheduled to take place before May.

“NoMo jobs” Mr Gandhi tweeted, punning on the first two letters of the prime minister’s last name, following the report in a leading financial newspaper that unemployment under BJP rule during 2017-18 was at a 45-year high of 6.1 per cent.

In response, the BJP accused Mr Gandhi of inheriting fascist Italian dictator Benito Mussolini’s “short-sightedness” and said he had “a myopic understanding of the issues”.

The BJP claimed that official data on employment actually showed an increase in the number of jobs over the past 15 months, but failed to provide any supporting evidence. Only a man who has never held a proper job can peddle such fake news, the BJP said of Mr Gandhi.

The party’s remarks were an unsubtle dig at Mr Gandhi’s privileged existence as a scion of the Nehru-Gandhi political dynasty that has dominated the Congress Party since its founding in 1885.

The BJP also referred to Mr Gandhi’s lack of administrative experience, which has been a recurring refrain in India’s political discourse, not only by the BJP but also by other rival parties.

The latest round of sharp exchange between the two men pitted against each other in the upcoming polls followed the suppression by the government of the National Sample Survey Office report on employment, which has emerged as a major controversy.

Two senior officials associated with the report, which is normally released towards the end of each year, resigned earlier this week alleging interference by other state agencies in compiling the report, which showed Mr Modi’s administration in a poor light.

Job creation was a major electoral promise by Mr Modi in the run-up to the 2014 general elections, which he won resoundingly.

“The BJP government has failed miserably in its job-creation endeavours,” said political analyst Seema Mustafa of the Centre for Policy Analysis in New Delhi.

The BJP contributed to the poor unemployment figures through measures such as its November 2016 demonetisation, which took a huge economic toll on India’s massive informal workforce.