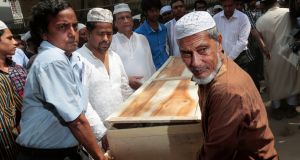 Bangladeshi Muslims carry the body of Xulhaz Mannan for his funeral in Dhaka, Bangladesh, on Tuesday. A group affiliated to al-Qaeda claimed responsibility for the killings of gay rights activist Mannan and his friend. Photograph: AP

A group affiliated to al-Qaeda has claimed responsibility for killing a Bangladeshi gay rights campaigner and his friend, the latest in a string of murders of liberal activists and other minorities in the South Asian nation.

Mannan (35) was hacked to death on Monday in his apartment in the capital Dhaka by a group of assailants posing as couriers. His friend, actor Mahbub Rabbi Tonoy (25) was killed in the same attack, according to police.

Islamist militants have targeted atheist bloggers, academics, religious minorities and foreign aid workers in a series of killings that dates back to February 2015 and has claimed at least 17 lives.

But the death of Mannan, who published gay rights journal Roopbaan and also worked for US aid agency USAID, has caused particular alarm because his links to a powerful Western government offered no guarantee of safety.

“There’s a complete state of shock. People are really scared,” said one security analyst who knew Mannan personally and asked not to be named for reasons of safety.

The person said that the killing could “precipitate” moves abroad by those who feel the risks of staying in Bangladesh are too great.

Climate of intolerance
Homosexuality is illegal in Bangladesh, a Muslim-majority nation of 160 million people where sexual minorities are more marginalised than in neighbouring India.

A 2014 survey carried out by Roopbaan found that 54 per cent of lesbian, gay and bisexual individuals suffered constant fear that others would find out their sexual orientation.

Just over half of the 600 respondents said that they were mentally stressed, leading to depression, suicidal tendencies and self-hatred.

Roopbaan had no official permission to publish in Bangladesh. It was not available on news stands and appeared only sporadically.

“It was a publication mainly for the community and was not sold for outsiders,” said one supporter of the group. Another gay rights activist added: “We don’t know when the next edition will be published - all of us are saddened and devastated.”

International human rights groups say a climate of intolerance in Bangladeshi politics has both motivated and provided cover for perpetrators of crimes of religious hatred.

A Twitter handle identifying itself as an outlet of Ansar Al Islam said on Tuesday that its fighters had killed Mannan and Tonoy, denouncing them as “the pioneers of practicing (sic) and promoting homosexuality in Bangladesh.”

Ansar Al Islam, which is part of al Qaeda in the Indian Subcontinent, has issued similar claims in the past, but its authenticity could not immediately be verified.

Militant claims questioned
Maruf Hossain Sardar, spokesman for Dhaka city police, dismissed the group’s claim as baseless, saying that international militant groups like Islamic State or al-Qaeda had no organisational base in Bangladesh.

Islamic State, also known as Isis, claimed responsibility for the weekend killing of Rezaul Karim Siddiquee, a 58-year-old English professor at a university in the northwest who was hacked to death at a bus stop.

Western security experts doubt that there are any direct operational links between Islamic State, based in the Middle East, and militants operating on the ground in Bangladesh.

But they do say that a “call and response” of claims and statements of support for militant attacks through their propaganda channels allows them to create the impression of being in league together.

Human rights activists urged mainstream politicians in Bangladesh to abandon sectarian hostilities that date back to the 1971 war of independence, and to engage in a constructive dialogue that would deprive Islamist extremists of cover for their attacks.

“The Sheikh Hasina government needs to take an unequivocal stance on issues such as secular thought or gay rights, and ensure that those behind these attacks are properly prosecuted,” said Meenakshi Ganguly, South Asia director at Human Rights Watch, referring to the prime minister.

“The government seems much more obsessed with cracking down on political opposition than on ensuring that criminals with machetes stop axing down those that don’t agree with an extremist view of Islam.”