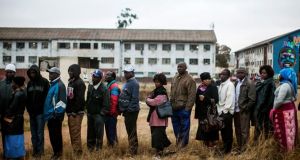 Voters line up to caste their ballots in Zimbabwe’s election in the Mbare area of Harare. Photograph: Pete Muller/The New York Times

Mr Tsvangirai dismissed yesterday’s election and said the results were invalid because of intimidation and ballot-rigging by Mugabe’s ruling party, which is claiming a landslide victory.

“This has been a huge farce,” Mr Tsvangirai told a news conference at his MDC party’s headquarters in Harare. “In our view, that election is null and void.”

Yesterday’s voting had been peaceful across the southern African nation, but the early claims from the competing parties heralded an acrimonious dispute over the outcome and raised fears of a repeat of violence that marred a 2008 election.

Releasing unofficial results early in Zimbabwe is illegal, and police had said today they would arrest anybody who made premature claims about the result. Election authorities were due to announce results within five days from yesterday.

But a senior source in Mr Mugabe’s Zanu-PF party said the outcome was already clear. “We’ve taken this election. We’ve buried the MDC. We never had any doubt that we were going to win,” the source said today.

Riot police took up positions outside the party’s headquarters in central Harare and other key locations in the capital. MDC offices appeared to be almost deserted.

An independent election monitor in Zimbabwe, who also could not be named for fear of arrest, said that early results were looking like a “disaster” for Mr Tsvangirai, who is making his third bid to unseat the 89-year-old Mr Mugabe.

Responding to the Zanu-PF claim, a high-ranking source in Mr Tsvangirai’s MDC party described the election as “a monumental fraud”.

“Zimbabweans have been taken for a ride by Zanu-PF and Mugabe, we do not accept it,” the source.

The MDC was to hold an emergency meeting later today. Several political sources said key MDC members had lost their seats, even in the capital,

Mr Tsvangirai’s main support base since he burst onto the political scene 15 years ago.

The head of an African Union observer mission said late yesterday the polls appeared at first glance to be “peaceful, orderly and free and fair”, although the MDC had said the run-up to the vote was riddled with irregularities.

However, the Zimbabwe Election Support Network (ZESN), the leading domestic monitoring agency, said today the credibility of the poll was seriously compromised by large numbers of voters being turned away from polling stations in MDC strongholds.

The United States had also expressed concern about the credibility of the vote.

Many of the concerns centred on the voters’ roll, which was meant by law to be released in electronic form to all parties before the poll, but which has still not been made available.

Earlier today, Zimbabwe police vowed to crack down on any attempts to leak early results from yesterday’s vote, complicating plans by some civic groups to pre-empt official announcements by the country’s election commission.

Police thwarted plans to collate election results posted outside polling stations by declaring it an offence to send results via text messaging or the Internet, said Frances Lovemore, a senior official at the Zimbabwe Election Support Network.