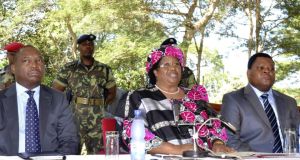 Mr Mkwezalamba, a commissioner for economic affairs at the African Union until his new appointment, replaces the outgoing finance minister Ken Lipenga. Analysts say Mr Lipenga’s sacking was no surprise as his department was at the heart of the scandal.

Southern Africa’s first female president took the radical step of disbanding her government on foot of warnings from the EU that it would withhold significant sums of aid money unless widespread multimillion dollar treasury fraud was tackled.

“There is need for a clean-up before we make our disbursement,” Alexander Baum, the head of the EU mission in Malawi, said in a statement released last week.

Norway went a step further and suspended its budget aid to Malawi, saying it had a zero tolerance policy for corruption and as a result no more money would be forthcoming until the matter was resolved.

The country has provided $41.4 million (€30.5 million) worth of aid to Malawi this year to date, a fifth in the form of budget support, according to local reports.

Some 10 government employees have so far been arrested on suspicion of swindling more than €2.2 million from state coffers in what has been dubbed the Capitol Hill Cashgate scandal.

Since dissolving her cabinet, Ms Banda has sacked four ministers, including those who oversaw the justice and labour departments. However, she retained most other cabinet colleagues, who were revealed in the new line-up made public yesterday.

It remains unclear whether Ms Banda’s actions ensure the EU releases the $39 million (€28.84 million) in budgetary support it was scheduled to this December.