US retail giant apologises to customers in China and offers compensation 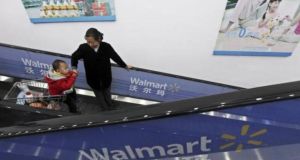 Customers take an escalator at a Walmart supermarket in Wuhan in China’s Hubei province. Photograph: Reuters

Walmart has recalled a donkey meat product sold in some of its stores in China amid reports it was contaminated with fox.

The embarrassing revelations prompted the US retail giant to apologise to customers and offer compensation after discovering the product contained the DNA of other animals.

In a statement released on Weibo, the Twitter-like social media site, Walmart said Chinese authorities had already detained employees at the supplier of the “five spice donkey meat” sold in its stores in Jinan, capital of the eastern province of Shandong.

It came after Chinese media quoted government officials saying the donkey products were made from fox meat.

Fox meat sells for about $1 per kilo in Shandong province and is cheaper than donkey, a popular snack in some parts of China.

While popular, donkey accounts for a tiny fraction of overall meat consumption. In 2011 China slaughtered 2.4 million donkeys, according to country’s livestock industry yearbook.

Walmart said it was issuing an immediate recall of the product and would provide full refunds and “appropriate compensation” for all customers who bought the packaged meat from its Jinan stores.

It also said it was co-operating with the authorities to investigate how the tainted product ended up on its shelves.

“We have been deeply shocked by this incident,” said Walmart China chief executive Greg Foran. “It has provided a deep lesson and shown that we need to continue to increase investment in supplier management.”

The company said it was considering legal action against the supplier of fake donkey meat and pointed out that under Chinese law, retailers are not required to conduct DNA tests on all products sold in their stores to prove they are genuine.

The problem came to light when a customer bought 1,600 packages of the donkey meat and then demanded compensation when tests he commissioned showed the product contained fox meat, according to Chinese media reports.

These reports quoted Walmart as initially saying it thought the customer was trying to extort money.

Food and product safety scandals remain rampant in China, despite years of government attempts to tackle the problem.

There have been countless cases in recent years of adulterated rodent meat being passed off as that of more expensive animals.

In the past few weeks at least a dozen babies have died after being injected with a hepatitis vaccine produced by a company that supplies around 60 per cent of the country’s hepatitis B vaccines.