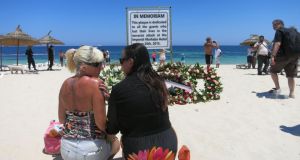 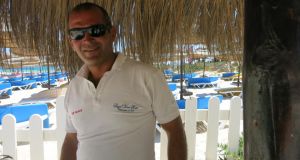 Eitham Ben-Aisha was one of dozens of beach workers at Sousse who rushed to confront gunman Seifeddine Rezgui, forming a “human chain” to prevent him getting to hundreds of families. Photograph: Chris Stephen 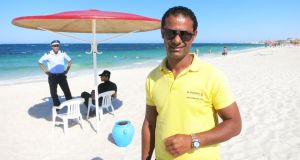 Mohammed Dabbou, a beach craft manager, on the now heavily patrolled Sousse beach in Tunisia. “I don’t think about dying – that came later,” said Dabbou, of the massacre by Seifeddine Rezgui. “I was only thinking I want to kill him.” Photograph: Chris Stephen

If they were soldiers, the heroics of Tunisian beach staff in braving bullets to save tourist lives at the Sousse massacre would have earned them medals. Instead, many are likely to lose their jobs.

The killing of 38 tourists, three from Ireland, by gunman Seifeddine Rezgui has created a mass exodus of tourists, with hotels now almost empty and staff being laid off.

It is bitter reward for lifeguard Eitham Ben-Aisha, one of dozens of beach workers who rushed to confront the gunman, forming a “human chain” to prevent him getting to hundreds of families scattered further down the beach.

“When I saw him shooting I ran towards him, I said ‘kill us, kill us,” he said. “Look at my shirt, it says lifeguard. That is my job, it is my duty to save lives.”

When the firing began, he ran to the scene with Mohammed Dabbou, a beach craft manager,  arriving amid blood, gunfire, overturned sun loungers and the dead and dying. “I found one old man. He was bleeding badly, ” said Dabbou. “There was no way to move him quickly, so I told him ‘Okay, you have to make like you are dead’.”

The gunman darted into the hotel to continue his killing spree then, 15 minutes later came back out again, and Ben-Aisha and Dabbou joined a dozen beach workers spreading out to block his path.

“I don’t think about dying – that came later,” said Dabbou. “I was only thinking I want to kill him.”

Their reward for such heroics is likely to be a pink slip, as Sousse, one of Tunisia’s biggest resorts, empties of visitors.

“Many staff have been laid off already, maids, hotel workers,” said British tourist Paul Young. Dublin artist Caraiosa Mehigan, who was staying in a nearby hotel at the time, is planning to start a social media campaign to highlight the plight of the beachfront heroes. She turned up for the minute’s silence on the beach on Friday, saying the Lord’s Prayer with an English tourist in front of a memorial plaque.

“I tried to give comfort to as many tourist workers as I can. They deserve it,” she said.

But things are likely to get worse here before they get better, with Tunisian president Beji Caid Essebsi declaring a 30-day state of emergency at the weekend, signalling that Tunisia will take on the terrorists.

The emergency laws temporarily give the government more executive flexibility, give the army and police more authority to detain suspects and restrict certain rights such as public assembly. The strategy has risks, with the terrorists likely to fight back.

With his job now on the line as the beach empties, Ben-Aisha is philosophical.  “You have to understand, I don’t save them [the guests] because they are foreigners, but because we are all the same.