Treaty makes land mines a weapon of past, group says

An estimated 4,000 people a year are still killed or wounded by land mines 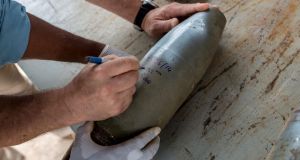 In the 15 years since a global treaty prohibiting land mines took effect, the use and production of these weapons has nearly stopped, new casualties have plummeted, and more than two dozen countries once contaminated by land mines buried since old wars have removed them, said the report by the group, the International Campaign to Ban Landmines. Photograph: Luc Forsyth/Getty Images

Despite the conflicts in Syria, Iraq and Afghanistan, the armed uprising in Ukraine and turmoil in other hot spots in the Middle East and Africa, one of war’s most insidious weapons - anti-personnel land mines - have been largely outlawed and drastically reduced, a monitoring group said in a report released Monday.

In the 15 years since a global treaty prohibiting these weapons took effect, the use and production of the mines has nearly stopped, new casualties have plummeted, and more than two dozen countries once contaminated by land mines buried since old wars have removed them, said the report by the group, the International Campaign to Ban Landmines.

“The Mine Ban Treaty remains an ongoing success in stigmatizing the use of land mines and mitigating the suffering they cause,” said Jeff Abramson, project manager of Landmine Monitor, the group’s research unit. The group, which won a Nobel Peace Prize in 1997 for its work, released the report to coincide with the Third Review Conference of the Mine Ban Treaty, which convened Monday in Maputo, Mozambique, where representatives from its 161 signers and other participants will spend five days discussing how to further strengthen enforcement of the agreement.

Anti-personnel mines are hidden explosive devices that are buried in the ground and designed to be detonated when a person steps on or near them, causing indiscriminate death and grievous injury. They can lie dormant for decades, long after a conflict has ended. Many of their victims are children.

A US delegation is attending the Maputo conference only as observers. Human rights advocates criticize the United States for what they call a conspicuous lapse that may be dissuading other countries from joining the treaty. The Obama administration, which says it has been evaluating the treaty’s provisions since 2009, has issued conflicting signals about its intentions.

“It’s going to be embarrassing for the US to have to explain to the high-level officials at the summit meeting why it has been reviewing its land mine policies for five years without making a decision,” said Stephen Goose, executive director of the arms division at Human Rights Watch and chairman of the US Campaign to Ban Landmines, a coalition of groups that has been pressing the United States to join.

US defence officials have resisted a blanket renunciation of land mines. Gen. Martin E. Dempsey, chairman of the Joint Chiefs of Staff, told a congressional hearing in March that he considered such weapons “an important tool” in the US arsenal, citing as an example their use in South Korea to deter an invasion from North Korea.

Others, however, have expressed frustration over what they regard as an inexcusable US refusal to join the treaty. Sen. Patrick J. Leahy, a prominent supporter of the treaty, has pressed the administration in speeches this year to endorse it.

“If land mines were littering this country - in schoolyards, along roads, in cornfields, in our national parks - and hundreds of American children were being crippled” like children in Cambodia, Leahy said in an April 9 statement, “how long would it take before the White House sent the Mine Ban Treaty to the Senate for ratification.”

Despite its apparent reluctance to join the treaty, the United States has spent more than $2 billion in the past two decades to help clear mines and aid victims, more than any other country. The United States also has stopped production and export of so-called dumb mines that cannot be disarmed, and it no longer uses plastic materials that can foil metal detectors used to decontaminate mine-infested areas.

The report by the International Campaign to Ban Landmines said that only five countries - Israel, Libya, Myanmar, Russia and Syria, all non-signers of the treaty - had used anti-personnel land mines since 2009. But it also reported that Yemen, which has signed the treaty, disclosed in November that it violated its pledge against land mine use in 2011.

The report said global stockpiles of mines had dropped sharply, with 87 signers of the treaty having completed their promised destruction of a total of about 47 million mines, since the treaty took effect. Twenty-seven nations contaminated with mines have proclaimed themselves mine-free during that period.

Casualties from leftover mines have also declined by more than half since the treaty took effect, the report said. Yet in the roughly 60 countries where contamination from land mines and other explosive remnants of war remains a problem, an estimated 4,000 people a year are killed or wounded.

The report said nearly half the victims were children. In Afghanistan, it said, children constitute 61 percent of all such casualties since 1999.