Tens of thousands pay their respects to Mandela

His face was full and strong, at peace and showing no pain, writes Peter Murtagh 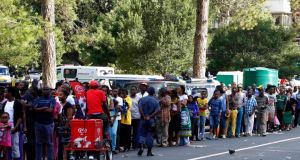 Mourners queue outside the Union Buildings where the coffin of former South African president Nelson Mandela was laying in state in Pretoria today. Photograph: Reuters

He looked well in death did Nelson Mandela. His face was full and strong, at peace and showing no pain.

It was not the emaciated countenance of a very old man at the end of a long decline.

He lay in his casket under a glass half top so that all might see him, might have eye contact and feel their faith, their love and their enormous admiration justly was rewarded by a final moment of proximity.

It was the Nelson Mandela they all knew in life but now taken from them forever.

His shirt was of the African style he favoured – a colourful rich mix of patterned dark brown and gold.

Around the bier on which he lay in state, four lieutenants and sub-lieutenants of the South African Navy stood at each corner facing out, heads bowed, their naval white uniforms absolutely pristine and gleaming bright.

They were complemented by four large displays of lilies. There was silence. The sun shone brightly. It was, quite simply, perfect.

And the setting was also perfect, in several ways.

Union Buildings are a statement structure. The seat of government of apartheid, the lengthy sandstone building lies atop a small hill with a commanding view over Pretoria.

Two wings, one right, one left, sport clock towers and meet in a semi-circular centre that is an amphitheatre. Monuments recall the sacrifices in two world wars.

Below, several terraces of beautifully maintained lawns and rose-filled beds sweep down to a large expanse of lawn – in the centre of which, resplendent atop his horse, sits a bronze cast of Louis Botha, Afrikaner Boar War hero, the first prime minister of the Union of South Africa, his bush hat pinned up on one side in the local style.

But above him today lay the first president of free South Africa, a man whose legacy will eclipse that of Botha’s for all time.

Beyond the confines of Union Buildings Park, thousands – tens of thousands by late afternoon – formed orderly queues from mid-morning. They lined several streets leading to the area, with queues snaking back on themselves as numbers grew and grew in the hot sun.

Buses ferried them up the hill to Union Buildings so they might pay their respects.

They filed past either side of the coffin in respectful silence – looking, believing. And as they walked away, police with boxes of tissues stepped forward at the slightest hint, an arm offered in support.

Their services were much required. Patricia Mingi, a 36-year-old woman from Klipat, a village not far from Pretoria, found it hard to hold herself together.

She stopped at the bottom of a flight of stairs on one of the terraces. “I am not feeling right,” she told me, “I am feeling ill. What I saw today, I cannot say. Everything he said made sense. For me, this is a great loss.”

Maria Pasha, an 82-year old woman of evident modest means, found it hard to speak after paying her respects. “Don’t like to talk too much,” she said at first when I approached her and her companion, Simon Maredi, aged 68. But then she gathered herself. “To see him. . .” and she paused before adding, with all the passion of her years and what she lived through: “This was a man! A man of men!”