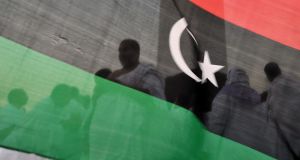 Until now Tobruk has been relatively secure compared with the rest of Libya. Photograph: Fayez Nureldine/AFP/Getty

A suicide bomber detonated a car laden with explosives in front of a hotel where Libya’s elected parliament was in session in the eastern city of Tobruk yesterday, wounding three deputies and eight others, the assembly’s spokesman said.

The bombing is the biggest attack on the parliament since it set up in Tobruk, near the Egyptian border. The assembly, which was elected in June, shifted its seat to Tobruk for security reasons after violence in its planned location, the eastern port city of Benghazi, worsened.

The car exploded in a parking lot near the entrance gate to the hotel as lawmakers sat in a nearby hall, parliamentary spokesman Farraj Hashem said. Three deputies and eight hotel staff were wounded, he said.

Until now Tobruk has been relatively secure compared with the rest of Libya, which has been in violent turmoil since Muammar Gadafy was toppled nearly four years ago. – (Reuters)