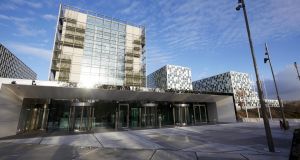 The International Criminal Court in The Hague, Netherlands: South Africa has withdrawn from the court following a row with ICC over its refusal to arrest Sudanese president Omar al-Bashir in 2015. Photograph: Martijn Beekman/AFP/Getty Images

South Africa has withdrawn from the International Criminal Court (ICC), in the most damaging blow to the 14-year-old institution since the collapse of the war crimes case against Kenyan president Uhuru Kenyatta, which energised the court’s opponents two years ago.

Announcing the decision, South Africa’s justice minister, Michael Masutha, maintained that the country’s obligations under the Rome Statute which set up the ICC, to arrest anyone wanted by the court, were fatally at odds with domestic laws giving sitting leaders diplomatic immunity.

South Africa did not wish to execute arrest warrants which could lead to “regime change”, Mr Masutha declared.

An “instrument of withdrawal” signed by international relations minister Maite Nkoana-Mashabane, and dated October 19th, has been sent to the United Nations in New York – and takes effect one year after receipt by UN secretary-general Ban Ki-moon.

The abandonment of the Kenyatta case for lack of evidence in 2014, before it even got under way, fuelled accusations among African countries that the ICC has been pursuing a pro-western “neo-colonial agenda” – focusing disproportionately on “hunting” black African leaders.

That blow to the credibility of the court was followed in 2015 by South Africa’s embarrassing refusal to arrest Omar al-Bashir, the Sudanese president wanted by the ICC for genocide in Darfur, when he arrived for an African Union (AU) conference chaired by Zimbabwean leader Robert Mugabe.

The refusal was described as “a betrayal of Nelson Mandela’s legacy” – a view reinforced when the supreme court of appeal upheld a high court ruling that Al-Bashir should indeed have been arrested, describing the ANC government’s conduct as “disgraceful”.

The ICC subsequently criticised South Africa for its failure to comply and since then the row has been simmering, with this historic withdrawal – soon to be followed by that of Burundi, whose parliament voted last week to leave – well signalled by Pretoria and simply a matter of time.

The South African decision has caused fury among the country’s opposition and international human rights groups, many of whom maintain withdrawal is not possible without parliamentary approval.

James Selfe of the main opposition Democratic Alliance, said his party would file a court application to set aside the withdrawal “on the grounds that it is unconstitutional, irrational and procedurally flawed”.

Human Rights Watch said the move showed “startling disregard for justice from a country long seen as a global leader in accountability for victims of the gravest crimes”, while Richard Goldstone of the Coalition for the ICC described it as “demeaning” for the parliament and people of South Africa.

Whatever happens inside South Africa, the decision to withdraw will give new impetus to calls within the AU for a mass withdrawal from the ICC – possibly replacing it with the African Court for Human and People’s Rights, which allows sitting heads of state immunity from prosecution.

Even if that does not happen immediately, one has to wonder how long it will be before the withdrawals of South Africa and Burundi are following by that of Kenya, America’s closest ally in the region – and the drip, drip of the ICC’s receding influence in Africa.