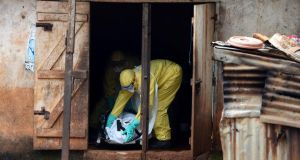 Undocumented losses may have slowed the country’s emergency response to the Ebola outbreak and may have led to unnecessary loss of life, the auditor’s report said. Photograph: Francisco Leong/AFP/Getty Images

It has called on 40 individuals, including high-profile medical officials and local leaders, to report to its offices immediately with documentation to show how the money was disbursed.

A government spokesman said the list of names was released on Tuesday as part of an independent investigation into a national auditor’s report that found a third of taxpayers’ money allocated to the Ebola fight between May and October last year was not properly accounted for.

“Allegations of corruption, we take very seriously. The perception of corruption is not good the image of the country,” he said.

They have been told to report “with immediate effect” and to “bring along documents in respect of the management of Ebola funds”.

The head of the Health for All Coalition, Charles Mambu, received six cheques made out to him instead of the organisation, according to the report.

Among others on the list are the country’s chief nursing officer, the district medical officer for Bombali, the home district of the president, and the former permanent secretary at the ministry of health.

Auditors found inadequate controls over the disbursement of funds and said some hazard payments had been made to hospitals with no proof the money was actually going to the health workers on the frontline. In some cases, there had been a “complete disregard for the law” in procurement.

These undocumented losses may have slowed the country’s emergency response to the Ebola outbreak and may have led to unnecessary loss of life, the authors said. – (Guardian service)