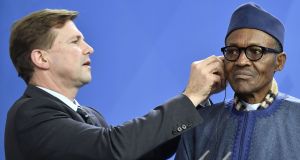 A spokesman for the German government helps Nigerian president Muhammadu Buhari prior to a press conference with chancellor Angla Merkel in Berlin on Friday. Photogragh: John MacDougall/AFP/Getty Images

Nigerian president Muhammadu Buhari has dismissed criticism voiced by his wife in a BBC interview, saying she belonged in the kitchen and he had “superior knowledge” about running a government.

“I don’t know exactly what party my wife belongs to. Actually she belongs in the kitchen, the living room and the other rooms in my house,” Mr Buhari (73) told reporters with a chuckle after a meeting with German chancellor Angela Merkel on Friday.

Aisha Buhari, Mr Buhari’s wife, told the BBC in an interview published on Friday that she might not back her husband in the next election unless he shakes up his government.

Her husband, a former military ruler, was elected last year after a campaign largely fought on his pledge to crush the Islamist militant group Boko Haram and crack down on corruption. He also served on the country’s supreme court.

Nigeria, which has Africa’s largest economy, is in recession for the first time in 25 years, largely due to the fall in global oil prices, which has slashed the state’s main source of income.

Mr Buhari said his government was continuing to combat the economic, security and corruption problems it inherited.

He said the government had made strides in fighting Boko Haram, which is now active in just 14 of 177 regions of the country, and was working to combat militant groups in the Niger Delta.

Mr Buhari also said Nigeria would continue working to free the remaining girls kidnapped by Boko Haram in 2014, after the jihadist group released 21 girls on Thursday.

“About 100 more [girls] are still in the hands of the terrorists,” he said. “We hope we’ll get some . . . intelligence to go about securing the balance.”

Mr Buhari said Nigeria was grateful for the help of the United Nations in trying to free the girls, but that Nigeria still faced massive consequences from the group’s power and influences, including up to two million internally displaced refugees.

Despite the problems, Nigeria – the most populous nation in Africa – will be able to produce enough food for its own population of 185 million people, and begin exporting food in about 1½ years, Mr Buhari said.

In Germany, Dr Merkel said the European Union would this month begin negotiations with Nigeria about a migration deal to ensure it could repatriate Nigerian citizens denied asylum in EU countries.

She emphasised the importance of focusing resources on those people fleeing wars rather than those looking for better economic conditions.

But she said Germany would continue to work with Nigeria to provide training for young people so they would not flee in the first place.