Muslim Brotherhood calls on Egyptians to rise up over killings 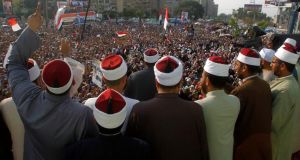 Egypt’s Muslim Brotherhood yesterday accused the army of massacring protesters staging a sit-in outside the republican guard barracks where ousted president Mohamed Morsi is said to be held while the army blamed on “terrorists” the killing of 51 demonstrators and wounding of 435. Health insurance officials denied women and children were among the dead.

The EU, the US, interim president Adli Mansour, the opposition Tamarod (Rebel) movement and a host of politicians urged restraint while the Brotherhood’s Freedom and Justice Party called upon Egyptians to rise up against “those trying to steal their revolution with tanks” and deposing Mr Morsi.

The party urged the international community to intervene to “stop further massacres” and prevent Egypt from being transformed into “a new Syria. ”

Military spokesman Ahmed Ali said at dawn a group armed with Molotov cocktails, stones, rifles, and other weapons attacked the perimeter of the cordon around the facility. “Shots were fired from rooftops,” he stated. A film showed a masked man in black firing at troops. The spokesman connected the attack with unrest in Sinai where extreme fundamentalists have been carrying out a violent campaign against the army and police. While the army, “cannot allow people to harm Egypt’s security,” the right to “peaceful protest” must be assured, he stated.

The ultra-orthodox Salafi Nour party said that even if pro-Morsi protesters climbed the walls of the military headquarters, the reaction was “highly disproportionate”. The party, the only fundamentalist member of the coalition, called on all factions to halt incitement as violence will make “everyone a loser and lead to the country’s collapse” and urged all political groups to engage in dialogue “in which each party knows it cannot win everything.”

Sunni supreme authority Sheikh al-Azhar,Ahmed al-Tayeb, expressed “deep sorrow,” warned against civil conflict and threatened to withdraw from society until the violence ends. He called for a six month transitional period and the release of prisoners.