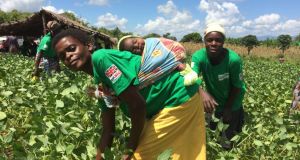 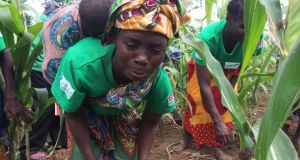 Farmer Lianeva Candiado, with her grandson Pedrito Artur on her back, working in the cornfield at Concern’s farmer field school in Domba, Manica province, Mozambique. Photograph: Mary Boland 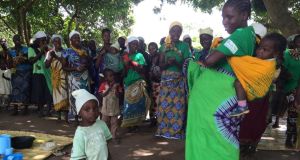 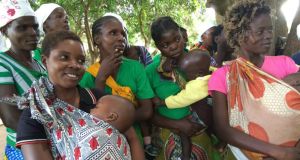 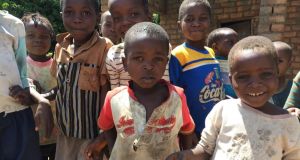 In a country afflicted by chronic malnutrition, the fertile soil of Mozambique’s central Manica province offers up rich sustenance to those who know how to work it.

Subsistence farmer Lianeva Candiado, a grandmother who has been raising her one-year-old grandson, Pedrito Artur, since the death of her daughter, is learning the techniques and tricks that will make all the difference between a meagre cornfield and a bumper crop – and in the process is being introduced to exotic new tastes on her dinner-plate such as carrots, tomatoes and soya beans.

“Before, we sometimes used to eat raw carrots, but they were not a big part of our diet; we didn’t grow them much,” says Lianeva, one of 25 pupils at a “farmer field school” run by Irish charity Concern in Domba, in the district of Báruè. Now, she and her classmates – more than half of them women – have been cultivating the root vegetable on their farms, along with a variety of other crops including lettuce, pigeon peas and yams, since the school was set up a year ago.

They come here to the demonstration farm for instruction, and then apply the techniques at home with guidance from a “technician” farmer trained under the scheme.

With a sleeping Pedrito wrapped snugly on her back in a capulana, or traditional sarong, Lianeva and the other students, led by school president Augusto Cinturão, inspect rows of corn from two crops that have been treated differently: one with animal manure, the other without. The contrast is clear – the spreading of widely available, no-cost manure has resulted in taller, more vibrant stalks.

“We show two methods – the traditional way they are used to, and the more advanced,” explains Comichane Avelino, Concern’s project officer for Báruè’s 25 schools, which provide guidance to 625 farmers. “By ‘advanced’ we mean that we might just use manure – in the traditional method the farmers were using nothing to fertilise crops – and we practise conservation agriculture.”

This means combining crops that complement each other for a better yield. “A maize and beans combination, where the beans are planted below the maize and spaced out, allows the beans to produce nitrogen, which works as a fertiliser.”

Given the extreme poverty prevalent in rural Mozambique – it ranks a lowly 178th out of 187 countries in the UN’s 2014 Human Development Index – there would be little point in showing farmers here how to use tractors or other unattainable machinery. The practical and relevant advice offered, say the students, has had a dramatic effect on their lives, not only in terms of better farming but also because it has introduced them to more nutritional – and interesting – eating: having survived until recently on a diet dominated by xima, a mix of pulverised maize and water, the local population is now learning to experiment with and develop a taste for a wide variety of foods.

“Things have improved,” says Manhambu Bazar, a grandmother who says she has never known her age. “We are using better seed . . . and sesame and soya are new crops to me.”

As in many rural areas across Mozambique, sufficient food was being grown but the lack of crop diversity and resulting limited diet had led to severe malnutrition. The scale of chronic malnutrition countrywide is 43 per cent — it is more than 45 per cent in Concern’s target areas in Manica and Zambézia provinces — placing the country in the “alarming” category of the 2014 Global Hunger Index.

Ireland allocated more than €38 million to development aid in Mozambique in 2014, most of it spent on health and education programmes, with €1 million devoted to Concern’s programmes.

Manica is a world away from Mozambique’s capital, Maputo, where the skyline has been littered with cranes and new high-rises since major reserves of offshore gas were discovered in the north of the country in 2011. While the arrival of international excavation firms and the resulting construction boom have pushed annual economic growth to beyond 7 per cent – albeit from a low base – the effects are not being seen much beyond the capital and cities near exploration sites. Economic and gender inequality are among the country’s biggest development challenges.

“This area has high productivity in terms of agriculture, but in terms of nutrition the situation is quite low,” says Machado Vilanculos, Concern’s nutrition co-ordinator of a programme of care groups for mothers and babies in Báruè and Zambézia. The scheme, which in Báruè involves 300 women, focuses on teaching mothers how to prepare a varied diet to prevent malnutrition during a baby’s first 1,000 days. There is also instruction on family planning, hygiene and sanitation, and on the prevention of HIV transmission between mother and child.

In Phandira, 12km from Domba, women attending one of the care groups sit under a tree with their babies and sing along while 29-year-old mother of three Sara Pita dances out a version of a family planning lesson: with a baby on her back, another in tow and a pillow stuffed under her capulana to indicate a further pregnancy, the message is simple: “You don’t want to end up like me.”

She sings to the group that it’s not good for a woman to fall pregnant within a year of giving birth, and then acts out a scenario with 26-year-old mother of three Lucia Tuboi, in which Lucia advises Sara to get contraception at the clinic. Another nugget imparted between girlfriends is that if the baby has a fever, take her to the clinic without delay. Care group promoter Ana Paula Capataj regales her audience with an account of the female reproductive system and a history of contraception, from chastity belts to condoms, and explains what is available locally.

All the women agree when Donaida Paulo (32) says her seven children suffer fewer illnesses since she joined the group and learned how to be careful with hygiene.

“Sometimes the men don’t like their wives coming here – they come along to see what it’s all about,” says the group’s community mobiliser, Maria da Glória. “Sometimes they won’t give permission for their wives to attend.” Her comments draw knowing nods from the other women. The plan is to engage local men in the project, says Machado. “Some are against it. We need to get everyone on board to see and share the benefits.”

Development rating: 178th out of 187 countries