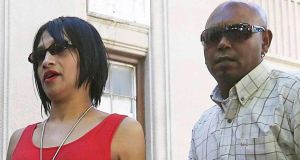 Celeste Nurse (l) and a family member. Ms Nurse’s newborn was kidnapped from a Cape Town hospital in 1997. The girl has been located nearly 18-years later. Photograph: Stringer/AFP/Getty Images

A newborn who was kidnapped from a Cape Town hospital in 1997 has been located by her family.

A 50-year-old woman was arrested and appeared in court on charges of kidnapping and fraudulently pretending to be the child’s biological mother, South African police said.

The girl, who turns 18 in April, was raised by the arrested woman and her husband as their only child. She had been living just a couple of miles from her biological parents.

The discovery happened by chance, when the girl became friends with her younger biological sister while they attended the same school.

Friends reportedly told her about a new student who had an uncanny resemblance to her. The two girls met and bonded instantly, despite the four-year age difference.

The younger daughter told her parents about her new friend who looked just like her. The family then invited the girl to their home for coffee.

After seeing her, the father immediately contacted the police, who revived their investigation into the kidnapping.

The police found that the couple claiming to be the teenager’s parents could not prove she was their biological daughter, and DNA tests were carried out. The tests confirmed she was the child kidnapped from the Groote Schuur Hospital.

While recovering from the birth of her first child in April 1997, the girl’s mother had woken up to find a woman dressed as a nurse sitting by her hospital bed, her newborn baby still in the cot.

When she woke up again, “there was a nurse saying my child is gone. You can’t imagine the feeling”.

The family had always celebrated their missing daughter’s birthday on April 28th, and following her discovery the girl’s biological family is planning a celebration for her first birthday with them.