In Uganda, radio brings together couples separated by coronavirus 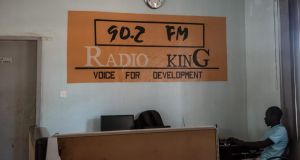 Inside the offices of Radio King 90.2FM in Gulu, northern Uganda, where presenter Okeng Isaac Jans dedicates segments of his show to connect loved ones. Photograph: Sally Hayden

A radio station in northern Uganda has been reuniting people separated by the country’s coronavirus-related travel ban, which split families, lovers and friends when it came into effect in March, with just one hour’s notice.

In the first two weeks of the lockdown this was a daily segment, explains Okeng Isaac Jans, a 28-year-old who presents the breakfast show six hours a day, five days a week.

“It is mostly friends, people who are dating, school friends, workmates locked in different towns. People are trying to connect with loved ones and see how they are,” says Jans. While data is relatively cheap, some rural areas don’t have internet connection, and phone calls are expensive.

Now, the segment goes out on Wednesdays and Fridays.

“It’s become more complicated to connect people as the lockdown goes on, not least because many have lost their routines,” Jans says. “People are doing a lot of sleeping these days.”

Radio King 90.2 FM was set up in 2004, when conflict was still raging across northern Uganda. The medium has been used effectively before to send messages encouraging rebel fighters to give up arms and return to their homes. Specially-written songs were played confirming there was an amnesty, and that insurgents would be safe and welcome if they came back.

Since the pandemic began, the country’s musicians have released an array of coronavirus-related songs, which have been broadcast across more than 200 radio stations. The most ubiquitous was penned by opposition leader and pop star Robert Kyagulanyi, who goes by the name Bobi Wine, and sings that it’s necessary to “sensitise the masses to sanitise” in his song ‘Coronavirus Alert.

In a studio in Gulu city, Jans sits between red and white soundproofed walls, a thickly carpeted floor beneath his feet. He plays music from Ugandan girl group The Obsessions, Caribbean band Kassav’, and Whitney Houston, while regularly reminding people to “stay safe and wash your hands”.

In one of his segments connecting people who were split, a man called Alvin phones up, asking to be put through to his “colleague” Sefa, “the future wife of mine”.

“Who is Alvin to you?” Jans asks Sefa, when she answers after several rings.

“He asked us to call you and tell you he loves you so very much, no matter the distance,” Jans says.

On air, their lines crackling, Alvin thanks Sefa for everything she’s done for him. “You never go astray, you’ve been there for me,” he says.

“Not that much,” she responds.

Jans, in his booming radio voice, thanks them. “You’ve been a very wonderful couple. We’re going for a wedding very soon after corona, right?” he asks.

“Give us one more year,” says Alvin, who then requests Us Against the World by Westlife.

“I believe you’re going to love and stay loyal to each other during this lockdown and hopefully the time comes when you can meet again,” says Jans, before signing off. “Remember, we can do this.”