How the priceless manuscripts in Timbuktu were saved from destruction 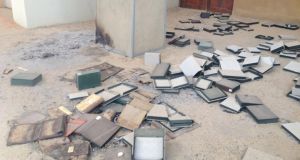 The remains of books set ablaze by retreating jihadists at the Ahmed Baba Institute in Timbuktu. Photograph: Mary Fitzgerald

Abba al-Hadi could not read any of the priceless manuscripts he gingerly placed into empty rice sacks each evening last August before spiriting them through Timbuktu’s darkening streets. The wiry septuagenarian had never learned to read or write but, having spent four decades working as a guard at the Ahmed Baba Institute, a state-run body responsible for the restoration and preservation of much of this storied town’s written heritage, he was all too aware of the value of the brittle pages bound in leather cases.

“People came from everywhere to see these manuscripts,” Al-Hadi recalls. “They told me that within the pages of these books was the history not just of Timbuktu, but also the world.”

When he reached the other side of town, the retired guard handed over the sacks to agreed contacts who then brought their precious cargo to the banks of the Niger River and from there, by pirogue and car, to Mali’s capital Bamako – and safety.

Months before al-Hadi embarked on his clandestine twilight journeys across Timbuktu, jihadists linked to Al-Qaeda in the Islamic Maghreb (AQIM) had swept into town on the back of a Tuareg rebellion that tipped the vast expanses of northern Mali into their hands. The militants adhered to a hard-line form of Salafism, itself an ultra-conservative current within Islam that seeks to emulate the earliest Muslims while rejecting the 14 centuries of Islamic scholarship that followed.

The jihadists’ puritanical vision was far removed from the syncretic Islam of Timbuktu which had been shaped by generations of scholars and traders who passed through the town during its heyday as a crossroads of trans-Saharan caravan routes and renowned centre of Islamic learning.


Demolishing and desecrating
After imposing their harsh version of sharia law, Timbuktu’s zealous new rulers set about demolishing and desecrating several Unesco-recognised tombs and shrines associated with the medieval preachers and sages that had earned it the sobriquet “City of 333 Saints”. The heavily bearded militants abhorred the local practice of venerating these saints, considering it akin to polytheism.

Not for the first time in Timbuktu’s turbulent history, the custodians of its libraries, repositories of an estimated 101,820 works on subjects ranging from jurisprudence to medicine, philosophy to science, began to fear for their manuscripts.

Calligraphers laboriously copied exquisitely detailed parchments brought by travellers from across Africa and the Middle East. Timbuktu’s elite furnished their own libraries with these editions, building up an eclectic store of knowledge. One library belonged to descendants of the Muslim Kati family, once prominent in the Spanish town of Toledo. Fleeing religious persecution in the 15th century, a senior member of the Kati family settled in Timbuktu, along with his impressive collection of books.


Waves of intruders
Timbuktu’s antiquities, handed down through generations of its leading families, have survived waves of intruders from Moroccan conquerors to European explorers and French colonialists thanks to the local tradition of secreting the manuscripts under mud floors, inside wall cavities and leather trunks, or deep in the desert.

When the jihadists first arrived in Timbuktu last year, the Ahmed Baba Institute, named after a 16th-century scholar considered the town’s most celebrated due to his prolific work on theology and Islamic jurisprudence, was in the process of transferring its collection of some 30,000 manuscripts to a new, purpose-built complex next to the famed mud-walled Sankoré mosque. A sign in Arabic and French gives its full name: the Ahmed Baba Institute of Higher Learning and Islamic Research.

The main jihadist group controlling Timbuktu was Ansar ud-Dine, a largely homegrown Malian outfit led by Tuareg notable and former Malian diplomat Iyad Ag Ghali, who would have been only too aware of the town’s heritage.

“In the beginning they told us they would protect the Ahmed Baba Institute because they said this was a place for Islam,” says its interim director, Abdoulaye Cissé. “But later they told us not to come back.”

The militants took over the sleek new building, changing the locks and transforming bedrooms once occupied by visiting scholars into sleeping quarters for their men. They were oblivious to the fact only 2,000 manuscripts had been moved there — most of the Ahmed Baba catalogue remained at its previous home where Abba al-Hadi still lives with his family. Within weeks, the rheumy-eyed former guard was told of the secret plan to save the institute’s collection – and his role in it.

As it turned out, fears for the safety of Timbuktu’s manuscripts were not entirely misplaced. In January news of a French-led military intervention to dislodge the alliance of jihadist groups that had taken control of northern Mali’s towns, including Timbuktu, prompted a chaotic retreat by the militants.

Despite the jihadists’ assurances that they would secure the Ahmed Baba Institute, their last act before fleeing was to seize whatever they could find in the complex before setting the books alight in one of its elegant courtyards. The erroneous claim that most of Timbuktu’s manuscripts had been destroyed emanated from its mayor, who was not in the town at the time. Contrary to reports, the institute itself was not burned down and did not suffer any other damage.


Act of revenge
“From what we can discern, they managed to find less than 5 percent of what was here,” says Cissé. “It seems they wanted to destroy the books at the last minute to show they are fighting not just Mali, but the world. It was an act of revenge for the fact they were being forced out.”

Today, manuscript cases with serial numbers on the spines lie scattered in the courtyard beside a pile of ashes which stirs gently in the wind. On a nearby wall “Ansar ud-Dine” is scrawled in Arabic. Amid the charred ancient leather bindings and sooty fragments of pages, I find a book cover, licked by flames but still legible, which almost seems like a riposte to the jihadists. It reads in French: “Islam is the religion of liberty, progress, equality and justice.”

I show it to the guard who let me into the complex and he smiles. “This should be a message to them,” he says.


Challenge notions
For Abdoulaye Cissé and other guardians of Timbuktu’s heritage, the fact the crumbling manuscripts were almost lost forever has served to further reinforce their importance. Cissé points out that the books, which document so much about life as it was lived during Timbuktu’s rise and fall over centuries, challenge the notion that Africa’s history was exclusively oral until the arrival of European colonialists.

A plaque inside the Ahmed Baba Institute marking its 2009 inauguration notes that the new complex is a collaborative project between the governments of Mali and South Africa to make its collection accessible “for the promotion of the African Renaissance”.

“These manuscripts are important not just for Timbuktu to remember its history but also to remind the world that Africa has a rich, written history contrary to what some once believed,” says Cissé. “Losing even a fraction is a tragedy.”

Sitting on a fraying carpet in the grounds of the former Ahmed Baba Institute, Abba al-Hadi is modest about his role in saving so many of Timbuktu’s manuscripts.

“Some people have told me I am a hero because of this,” he says. “But I did it for Timbuktu, for Mali and the world.”