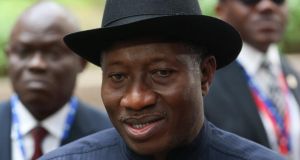 Islamist rebels duped dozens of Nigerian schoolgirls into thinking they were soldiers who had come to evacuate them before abducting between 50 and 100 in their latest anti-government raid.

Gunmen suspected to be members of the radical Islamist movement Boko Haram swooped on Chibok town in Borno state and on its nearby all-girls government secondary school late on Monday, calling on the students to leave their beds in the hostel.

The mass abduction of schoolgirls aged between 15 and 18 has shocked Nigeria and showed how the five- year-old Boko Haram insurgency has brought lawlessness to swathes of the arid, poor northeast, killing hundreds of people in recent months.

It occurred the same day a bomb blast, also blamed on Boko Haram, killed 75 people on the edge of the capital Abuja, stirring fears of violence spreading from the north of Africa’s number-one oil producer and most populous nation.

Nigeria’s government pledged to step up its fight against “terrorism”, which it said had “nothing to do with religion, ethnic group or tribe”.


Armed visitors
The Chibok students, who had returned to sit final-year certificate exams at their school despite a Borno state-wide closure of educational centres because of recent Boko Haram attacks in the northeast, initially obeyed the armed visitors, thinking they were Nigerian troops there to protect them.

“When we saw these gunmen, we thought they were soldiers, they told all of us to come and walk to the gates, we followed their instructions,” said Godiya Isaiah (18), who later managed to escape the abductors.

But when the armed men started ransacking the school stores and set fire to the building, the terrified girls being herded at gunpoint into vehicles realised they were being kidnapped.

“We were crying,” Ms Isaiah said, recounting how she later jumped from a truck and ran away to hide in the bush. Other girls were packed into a bus and some pick-ups.

There was still confusion over exactly how many girls had been kidnapped. Initial accounts from Chibok said about 100. Borno state governor Kashim Shettima said reports from parents and guardians of children missing so far totalled 50, although this might not be the final figure.


Unsuspecting
Mr Shettima said at least 14 girls had managed to escape and reach safety. Borno state education commissioner Inuwa Kubo said other girls told the same story as Ms Isaiah: “They went into the bus unsuspecting. They were lured into the vehicle because they were told that the school was going to be attacked.”

Boko Haram, which broadly means “western education is sinful”, has previously attacked several schools as symbols of secular authority, killing pupils and teachers, as well as Christian churches and state targets such as police, army and government offices.

Nigerian police and army patrols were yesterday still scouring the bush and hills around Chibok for the missing girls.

Chibok is not far from a rugged area of forest, hills and caves where military officials say Boko Haram has camps near the border with neighbouring Cameroon. They have abducted girls in the past to be sex slaves for the fighters and to do camp work.

No one has claimed responsibility for the abduction or for the rush-hour bomb blast on Abuja’s outskirts, which put the capital on alert about three weeks before it was due to host a high-profile World Economic Forum on Africa.

Nigerian president Goodluck Jonathan has pointed the finger of suspicion for the bombing at Boko Haram, bringing home to Nigerians in the centrally located capital that the Islamist insurrection ravaging poorer states hundreds of kilometres to the northeast could also strike closer to home. – (Reuters)

Thousands march in Bangkok in weekend of pro-democracy protests 20:40
US declares all international sanctions against Iran restored 20:12
Belarusian police have personal details leaked by hackers 18:01
Trump gives blessing to deal to allow TikTok to continue to operate in US 18:00
Crowds gather in Washington DC to mourn Ruth Bader Ginsburg 17:17