Egypt puts Muslim Brotherhood leader and 682 others on trial 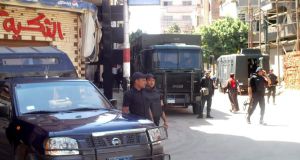 Egyptian policemen stand guard outside a court during the trial of supporters of toppled president Mohamed Morsi in Minya, Egypt, yesterday. Photograph: EPA

The leader of Egypt’s outlawed Muslim Brotherhood and 682 others went on trial today on charges including murder, a day after more than 500 supporters of deposed Islamist president Mohamed Morsi were sentenced to death.

Brotherhood supreme guide Mohamed Badie (70) and the others were being tried in the same court in Minya province that condemned 529 members of the Islamist group to death, in what rights groups said was the biggest mass death sentence handed out in Egypt’s modern history.

The UN human rights office said the mass death sentences contravened international law. The EU and the US also criticised the ruling, as did rights groups.

“Yesterday was . . . a death sentence for the credibility and independence of Egypt’s criminal justice system,” said Nicholas Piachaud of Amnesty International. “There is little hope of the 683 people indicted in this latest trial of receiving fair proceedings before the same judge who yesterday handed down death sentences so readily.”


Sentences defended
Egyptian justice ministry official Abdel Atheem al-Ashari defended the death sentences, saying in a statement in response to the ruling that the separation between the state and the judiciary was one of the main principles of any democratic system.

There are no signs that western powers will back their dismay with action to push for greater democracy in Egypt, which is of strategic importance.

Defence lawyers boycotted today’s court session after complaining of irregularities. Reporters were barred from the court. The verdicts are due on April 28th. – (Reuters)