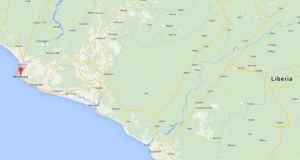 Mary Ann O’Driscoll, from Glasnevin in Dublin, had been staying just outside the Liberian capital Monrovia when she was knocked down by a speeding vehicle, and subsequently died on Wednesday. Image: Google Maps.

A Dublin woman who died while working on an aid mission in Liberia has been named as Mary Ann O’Driscoll.

Ms O’Driscoll, from Glasnevin and aged in her mid-20s, died on Wednesday after being knocked down by a car.

She had been staying with religious charity Franciscan Works at the group’s Liberia Mission just outside the capital Monrovia.

The Department of Foreign Affairs has confirmed it is providing assistance to Ms O’Driscoll’s family.

In a post on the group’s website yesterday, Ms O’Driscoll was described as a “vibrant woman with an infectious, saintly faith”.

“Mary Ann was committed to helping Liberia Mission students grow first in Faith, then education... At the core of Mary Ann’s motives was a pure desire to serve God, and she did so with radiant Joy,” it continued, adding that Ms O’Driscoll had been acting as the mission’s director.

She is survived by her parents Betty and Paddy O’Driscoll, her siblings Maggie, Sarah, Katie, Leo, Joseph and Theresa.

The college graduate had recently written an update on her experiences in the west African state, which had been ravaged by the ebola epidemic following an extended period of war and strife over recent decades.

“I had every hope of travelling the world and even got accepted to a master’s degree.

“My plan was set and I was looking forward to my time in Liberia so I could close that chapter and tick the ‘do volunteer work’ box on my life check-list,” she wrote in a parish newsletter for Our Lady of Dolours in Glasnevin.

“After the three months I left Liberia with a heavy heart, I felt so drawn to missionary life and to the country... I look forward with anticipation to what we can achieve during my year here. I hope and pray my time here is fruitful and I can make a little difference.”

She flew to Liberia for her fourth visit to the country in January, having begun volunteering in February 2013. Details of her funeral have not yet been announced.