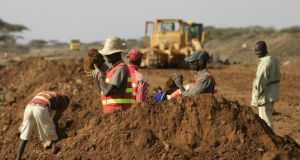 Kenyan men work at a road construction site near Isiolo town, 320km north of Nairobi, in July 2008. The road was being built by China Wuyi, a Chinese state company, and funded by African Development Bank and the Kenyan government. Since then the scale of Chinese aid to Africa has increased dramatically. Photograph: Antony Njuguna/Reuters

Chinese aid to Africa is creating pariah states rather than just supporting them, claim the findings of a study that reviews the relationship between aid and violence across the continent since the turn of the century.

And the region should expect to witness an increase in state-sponsored violence against civil and rebel groups as Chinese aid increases, the authors of the report, Chinese Aid and Africa’s Pariah States 2000-2011, believe.

In 2012, the scale of Chinese aid to Africa increased dramatically when then president Hu Jintao put $20 billion (€18.8 billion) in loans to countries on the table at the summit of the triennial Forum on China-Africa Co-operation – double the amount it previously offered.

The report’s authors, professors Clionadh Raleigh and Roudabeh Kishi from the University of Sussex, said the latest data from the development sector reveal the trend of increasing aid appears set to continue in the years ahead, with China now accounting for 10 percent of all the aid money pumped into Africa.

This strategy of not interfering in African domestic affairs, say critics, is employed by China in return for improved access to a country’s natural resources and support for its stance on issues debated and voted on at institutions like the United Nations and the World Trade Organisation.

China denies these accusations, maintaining its engagements with African states are for mutual benefit and that its policy is to avoid imposing political views, ideals, or principles on to recipient countries.

Nature of its support

The rapid growth of China’s no-strings-attached aid has also prompted development experts, such as former UK international development secretary Hilary Benn, to warn it is undermining efforts to create democratic and accountable administrations.

Traditional donor aid from the West to African nations usually requires the recipient country to adhere to conditions that support democracy, human rights, electoral transparency and the fight against corruption.

African countries like Zimbabwe, Uganda, and Sudan are increasingly turning towards Chinese aid when Western aid is cut off because they no longer meet the conditions set down.

According to Raleigh and Kishi, although China isn’t targeting pariah states with aid, “it is making states into pariahs through providing resources to state leaders who are unafraid to use repression as a means to quell competition”.

“If the state has complete control over its budget, it will use its position to bolster its capacity to repress any potential opposition in order to secure its position,” they added, citing Ethiopia, Zimbabwe and Uganda as examples.

Indeed the study’s findings conclude that autocratic regimes do not generally receive a higher proportion of aid than other African nations. The crucial factor for Chinese aid provision is that it must benefit China; they also found that countries with a weaker rule of law get more aid as Chinese businesses are allowed to flourish in such environments.

“Ghana and South Africa receive some of the largest shares of Chinese aid, as do Sudan and Zimbabwe. Indeed, only Burkina Faso, Swaziland and the Gambia did not receive Chinese aid from 2000-2011, owing to their stance in support of Taiwan, ” say the authors.

To compile their study, the researchers sourced the latest data on Chinese aid to specific African countries from Aid Data, an organisation that tries to record aid flows, and then compared its country destination against violence that has been recorded there.

The violence data is from the Armed Conflict Location and Event Data Project, which has acquired the dates and locations of all reported political violence events in over 50 developing countries since 1997.

Interestingly, a second comparative exercise in which Chinese aid was replaced by Western aid, but other factors such as GDP were kept the same, showed the latter form of traditional development assistance also has its drawbacks.

“[Our] findings suggest that due to the fungible nature of Chinese aid flows, political violence by the state to suppress domestic competition increases with receipt of Chinese aid. This contrasts with ‘traditional’ aid flows which typically incentivise insurgent rebellion,” the authors noted.