Metre-long piece of metal found between Mozambique and Madagascar 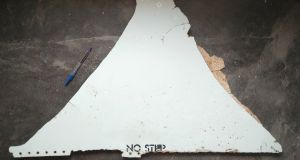 A photograph taken in an undisclosed location shows a suspected piece of aircraft debris found on the coast of Mozambique, with Malaysia’s transport minister saying there was a “high possibility” it came from a Boeing 777, the same model as missing flight MH370. Photograph: Getty Images

A piece of debris found off the southeast African coast that could be from a missing Malaysia Airlines flight is being sent to Australia for testing, officials said yesterday, two years after the plane carrying 239 people disappeared.

A white, metre-long chunk of metal was found off the coast of Mozambique earlier this week by a US adventurer who has been carrying out an independent search for Malaysia Airlines flight MH370. The debris will be tested by officials in Australia, with help from Malaysian authorities and representatives of Boeing.

Malaysia’s transport minister, Liow Tiong Lai, said on Wednesday there was a “high possibility” the metal chunk belonged to a 777 jet, the same type of aircraft as MH370.

Flight MH370 disappeared on March 8th, 2014, with 239 passengers and crew on board shortly after taking off from Kuala Lumpur bound for Beijing.